Warning: as will become patently obvious, I’m still working on how best to show the logs of our voyages. The app I’m trying to use, Nebo, turns out to be kind of clunky, so I’m reduced to taking edited screen shots. Perhaps I may be reduced to actually paying for an app instead of using free ones.

We started out fairly early from our very much appreciated docking site between shrimp boats at RE Mayo. By the way, I have no idea what the name signifies—think it’s the name of the little gas station near where were wedged in, and where we bought our seafood. In any case, we proceeded with some trepidation out to finish our voyage the short distance across Pimlico Sound. We had no problems at all, and arrived about noon into Dowry Marina just east of Bellhaven, where we expected to stay the night. 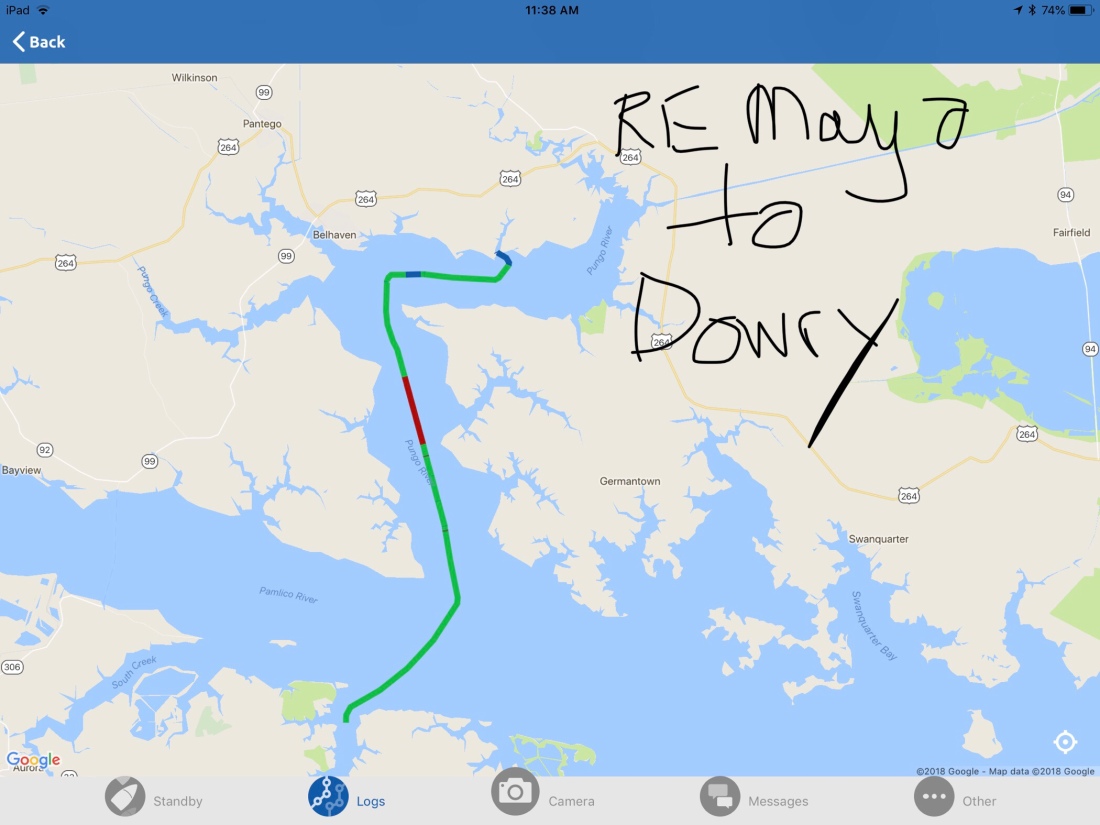 We were looking forward to filling our water tanks, doing some laundry in their FREE machines, and having some downtime to plan the next stage of the trip. Unfortunately, it was not to be.

We knew that sustained winds from the southwest were supposed to start up that night (which is why we’d skedaddled out of Beaufort earlier than we’d wanted). Sadly, the more we looked at the orientation of the marina, and in particular the dock to which we were moored, the more we realized that we were oriented right in the path of southwest winds, and were likely to be rocking and rolling overnight, and not in a good way.

SO I dejectedly put away our dirty laundry, hefted the bags of garbage and recycling back onto the boat, helped unhook from the electrical pedestal next to us, and cast off our lines (I mean, carefully untie and bring them back onto the boat in the EXACT order I was directed to) to continue our voyage. The second voyage that day was also fairly uneventful until the last couple of hours going up the Alligator River. 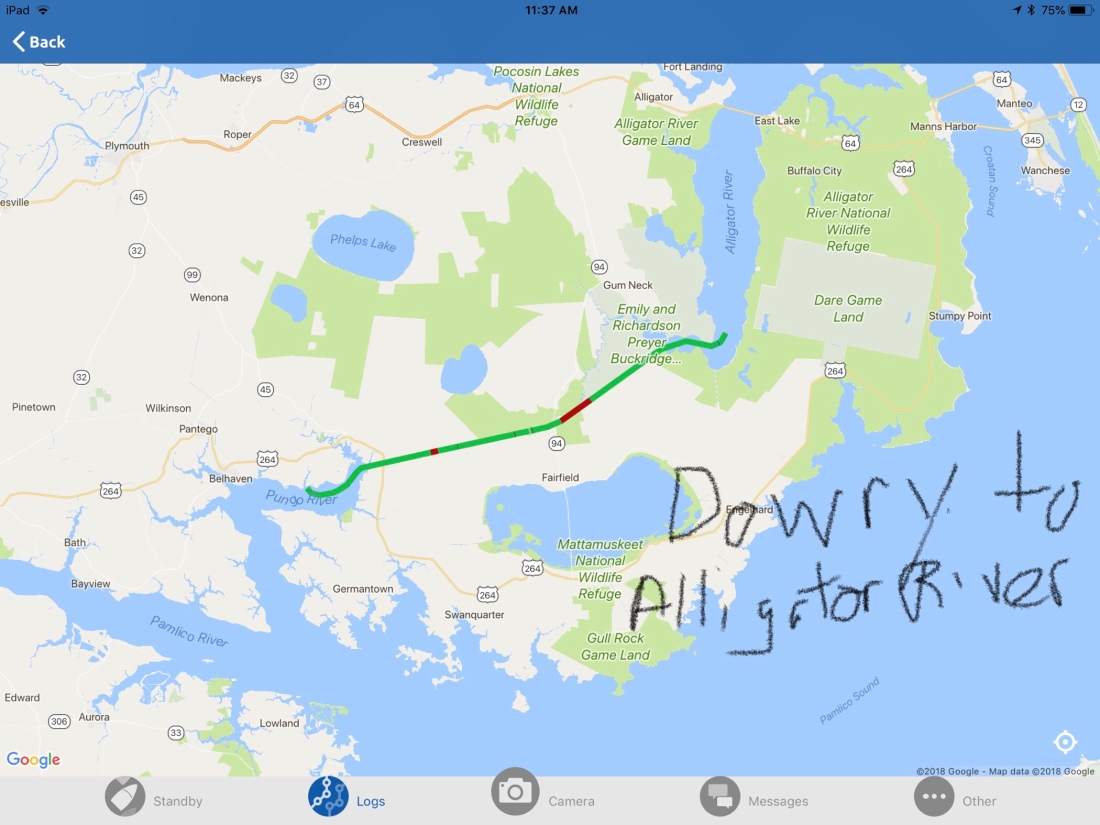 Please note: Our log is missing the portion where we traveled north on the river; marina is actually near the top of the page. Perhaps my iPad decided to shut itself off and cower under the table like Hunny did. The Alligator so-called “River” actually seemed much more like a large bay in that it was very wide, and very exposed to wind and waves of the Atlantic Ocean raging just over the shallow spits of the low lying land to the east. We pounded along, gritting our teeth with every bounce and roll, but finally limped into the marina’s basin and breathed a sigh of relief at the instant calm.

The marina is located exactly in the middle of nowhere, next to a two lane highway with no shoulders, so biking was out. Besides gas, restrooms, shower, and laundry, it offered a small convenience store, and interestingly, a little cafe which served local specialties such as “alligator bites” (yes, real alligator meat), fried and dipped in “boom boom” sauce, shrimp and grits, trout, along with more traditional fast food. We tried breakfast there this morning, and I think I inadvertently ate more bacon fat in that one meal than I’ve had the entire year prior. It was delicious.

Hunny is in heaven here. Moored next to us is an elderly couple (our age–yikes!) and their 10 year old grandson Evan. 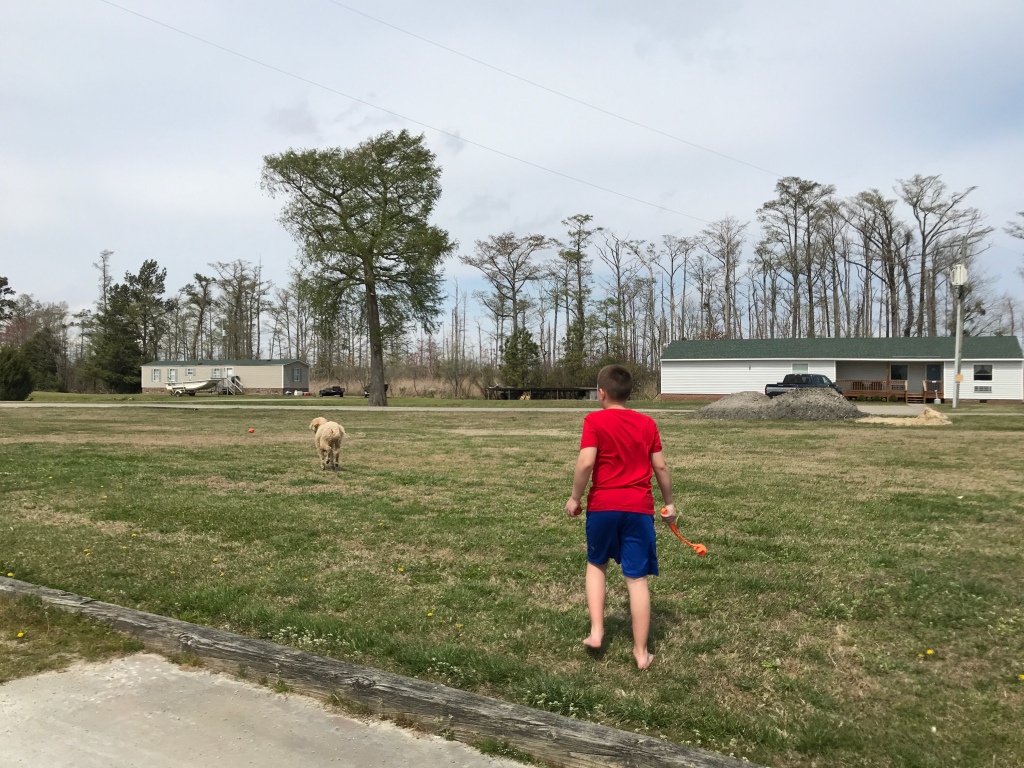 Evan and Hunny LOVE to play ball together; when Hunny gets a bit hot running after her beloved balls, she runs down the nearby boat ramp and swims around the marina while we yell “no!”, “come!”, and in general, try to coax her out of the dirty, possibly electrified water. It’s her favorite game. Right now she is lying exhausted on our couch snoring.

At breakfast, we asked our waitress where the nearest grocery store was. When she told us it was 10 miles away on a shoulder-less highway, she took pity on our crestfallen faces, and offered to drive us. We took her up on it (insisted on filling her tank in exchange). Her name was “Jill”, she is an EMT, and working in the cafe part time just because she likes to stay busy. She was a font of information about black bears, of which there’s a high concentration in this area. Told us about “the bear lady” who used to live nearby and thought she could feed bears and get away with it (she couldn’t). Here’s a picture of our chauffer, Jill.

Currently we’re sitting in the middle of a rainstorm. It’s supposed to be in the 30’s when we wake up tomorrow (big sigh here), but wind will be down so we’ll be heading north. Darn spring!