We thought we would stay at Beaufort, NC for a day or two because it looked like (and we’d been told) it was a charming town. We passed by their popular maritime museum on our way to dinner, there were several good restaurants according to Yelp, and we were right downtown with access to everything. Here are pictures of sunset from our table, and of people taking pictures of the sunset from our table. 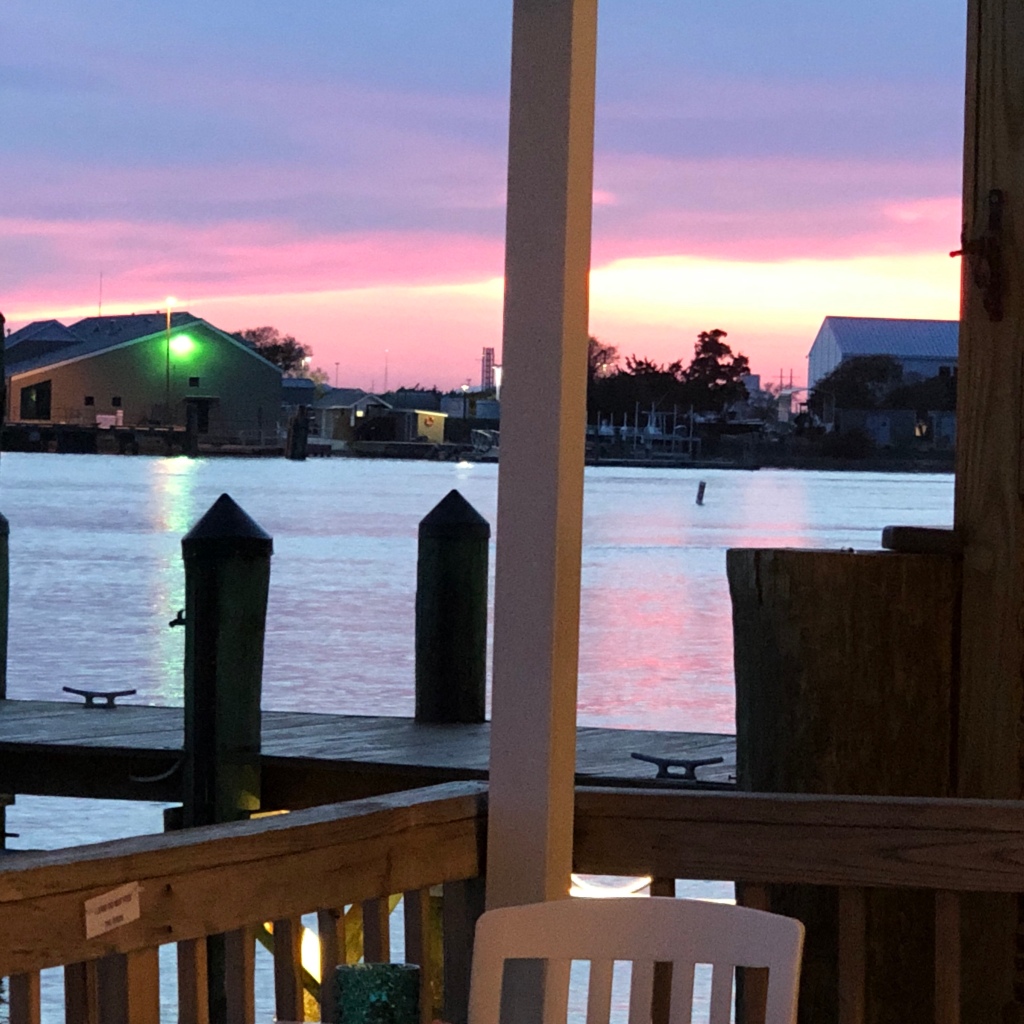 I guess people on the East Coast aren’t used to seeing sunsets over the water–their ocean is on the wrong side!

The next morning we awoke to fog.

We were good mariners and we were bad mariners that day. First the good: we DID check the weather. The bad: we should’ve checked it the night before. As we belatedly perused the predicted wind during our upcoming crossing of Pimlico Sound, we realized that we had a fairly short window to travel; if we stayed in Beaufort for one more day, it could be that we’d be stuck there for multiple (expensive) days because there was a storm brewing. So, as is beginning to feel usual, we quickly packed up and headed out at about noon, when the current was at its fastest and there was enough wind to make it….interesting.

I made my first big mistake as we were departing. We were tied up bow in to a dock on the port side, and there were two tall piling on our starboard. The guy in the sailboat in the slip next to ours came over and offered to help (boaters for the most part are extremely helpful, probably because we need all the karma we can get). So he untied our bow line, threw it onto the boat, and started up the dock, untying our lines as he went, and working his way towards the stern. Noticing he had to keep ahold of two spring lines in his arms, I thought I’d be “helpful” and untied the stern line. He immediately said excitedly, “No no, toss me that line quick!”, and I did–but not quickly enough. We heard a sickening scrape/crunch as the starboard stern was swept by the current into the piling next to us. He managed to pull the stern over, and we backed out, using the stern line as a pivot to back out of the marina (like he and David had planned all along, except they didn’t plan for the idiot mishandling lines). (As an aside, we inspected our starboard stern afterwards, and there are only a few scrapes/smudges in the “gelcoat” (outside skin) of the boat, and we plan to have the whole boat done anyway before we sell her, so not as bad as feared).

Once we thought we’d backed out of the marina far enough, we tried to turn to port and go forward, but the current kept pushing us starboard towards various hard, sharp things like docks and pilings and boats floating in the marina, so we’d have to reverse quickly again. After a couple of unsuccessful attempts, we tried something new–backed out a bit further than we had before, and swung our bow to the right, against the current, to turn 270 degrees instead of 90, We were then FINALLY able to proceed in the direction we wanted without playing bumper boats. Here’s a visible track of our loop-de-loop:

So we were finally on our way, and made good time despite having left a few hours later than we should’ve. Our big worry, and hence the need to leave Beaufort precipitously, was the crossing of the Sound. Pimlico Sound is a very large, very exposed body of water connected closely to the Atlantic, which quickly becomes dangerous for small boats foolish enough to cross in bad weather. Some agency (most likely the Corps of Engineers) created a canal through an island in the center of the Sound, which creates a brief safe haven in the middle of ones crossing, but it’s very short. Remember that point for later.

Most of our voyage was uneventful–the sun was fairly warm, there was not much wind, we were congratulating ourselves on leaving in time to beat the weather, and were hoping we could go fast enough to get to a marina just past the second part of the sound. Got through the first part of the sound uneventfully, and headed into the narrow channel I described before. Midway through the channel we passed a long wooden, rather derelict dock and pilings to which several large shrimp boats were tied, and laughingly commented that we should tie up there, hahaha. Continued on another few miles, and entered the second portion of Pimlico Sound, where somebody had turned on the wind switch. We were met by a howling gale, blasts of icy wind, and a sea that was full of whitecaps and obviously starting to build. We were surprised and terrified; quickly turned around and hightailed it back to the channel. There, one would have absolutely no idea what was happening a mile away. We ended up tying up on a commercial dock between shrimp boats for the night. 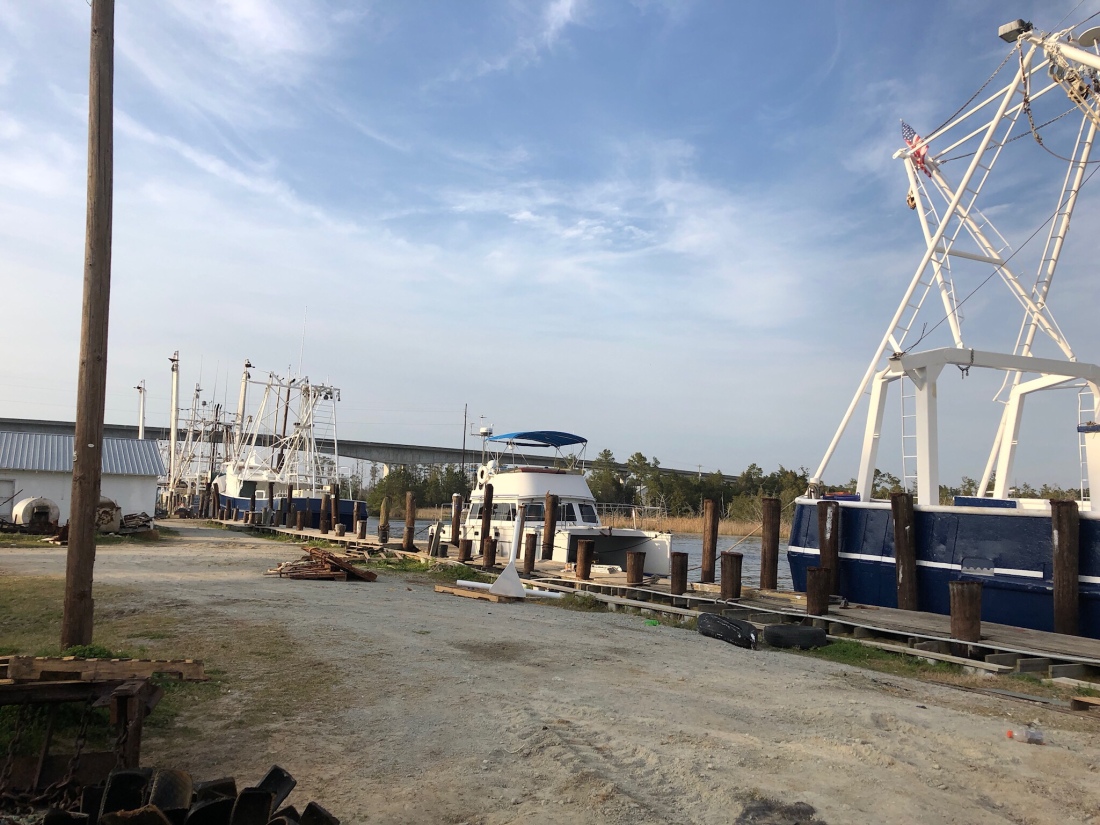 I put out the lock boards again (see one of first descriptions), and lots of fenders, one of the fisherman (and owner of the facility, who gave us permission) came over to help with tying up, and we were SAFE. Boy were we ever happy to be there. We were so LUCKY–that we hadn’t been in the middle of the Sound when the wind came up, that we had a safe haven so close, and that we could tie up instead of anchor (which may not have held in a strong wind).

The fisherman who helped us said we should go into the little store nearby and try the seafood. After we were settled, and Hunny had been taken care of, we wandered over and bought some local prawns (too big to be called shrimp) and a grouper filet. 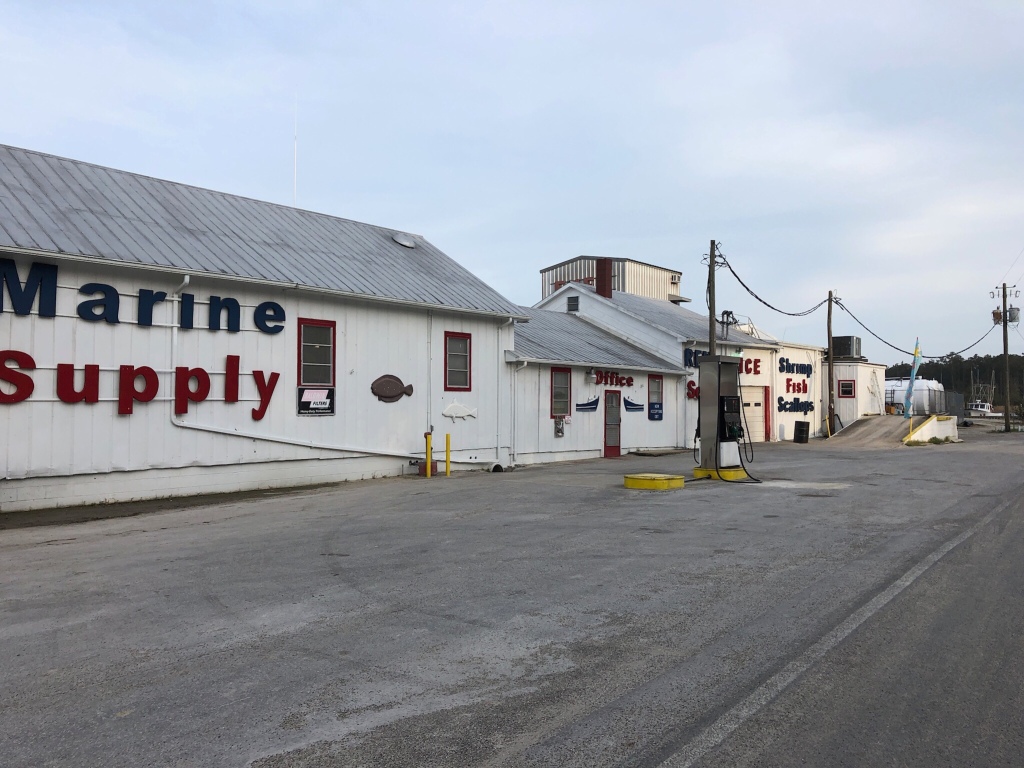 We feasted last night–grilled the shrimp and the grouper, and baked a couple of sweet potatoes. We had just filled our water tank in Beaufort, could run the generator to use the oven, furnace, and/or hot water, knew our holding tank was nearly empty, and had a clean head and shower available if need be. What a great feeling. We could hear the wind gusting at times, but were so protected that it didn’t affect us significantly; we slept well. Pray our good luck continues.

4 thoughts on “Beaufort, NC to RE Mayo docks”