Below shows our routes over the past and next few days, from Albermarle Sound to Elizabeth City, through the Dismal Swamp on up to Norfolk. 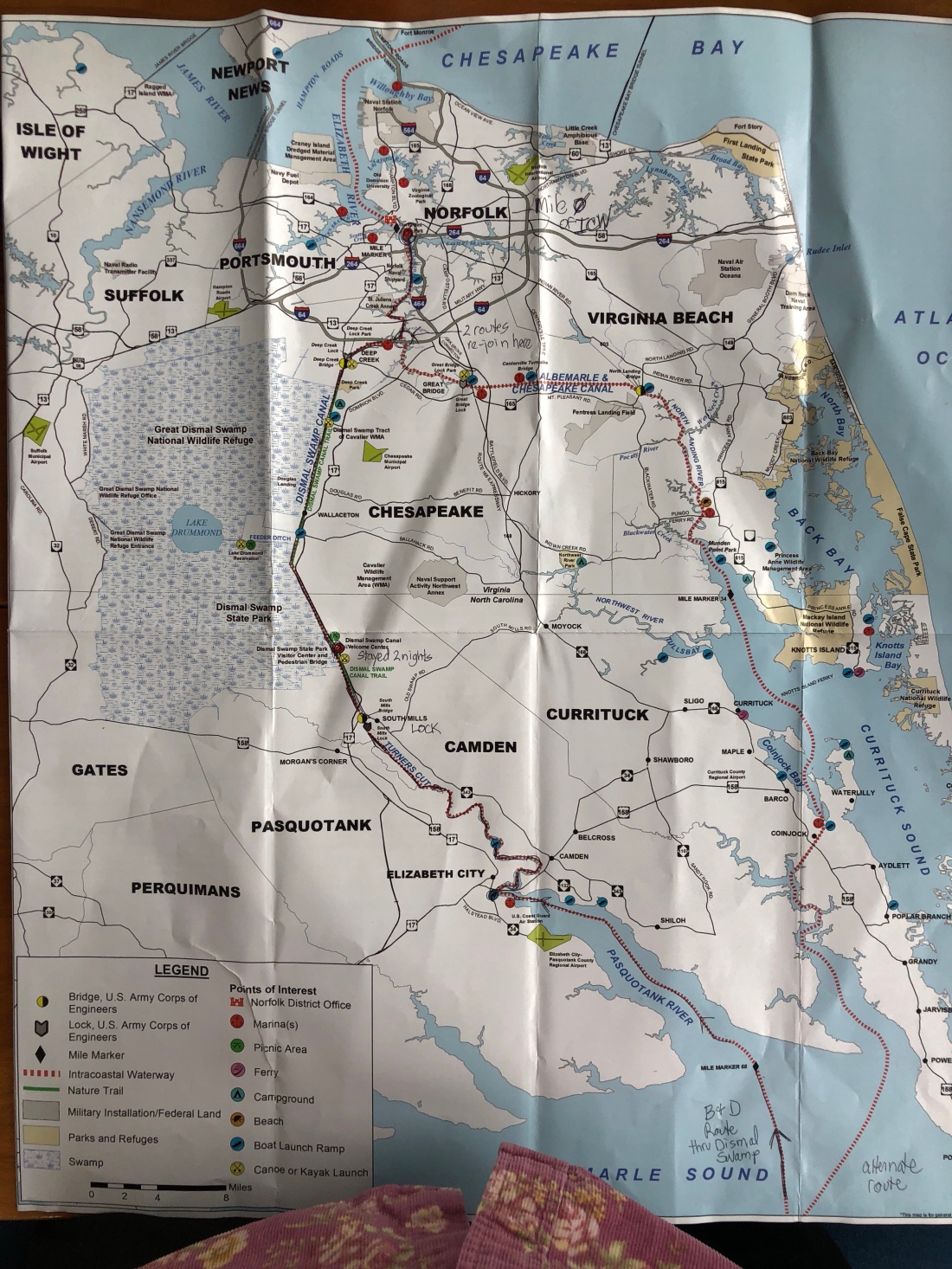 It was a short trip, thank God, to Elizabeth City from Alligator River across the Albermarle Sound (named for the Duke of Albermarle, if you care). We had fairly good weather (or else we wouldn’t have budged) except temps were in the 30’s when we awoke and didn’t warm up until after we crossed–we FROZE By the way, when I say “we”, I mean David–if it’s below 50, I scuttle down below like a cockroach. We were directly facing the icy wind, and the waves were still a bit high from the winds the day before. We might’ve said some bad words as we bounced and shivered across the Sound.

One aside here for you still reading: I have to admit that much of what I describe during our voyages is hyperbole. We are actually pretty comfortable and safe 99% of the time. I just think it makes for more interesting and enjoyable reading to describe the not so comfortable aspects of our trip. Don’t feel sorry for us, please.

Elizabeth City is a friendly little town that depends on two things for its livelihood: tourists on their way to visit the Dismal Swamp, and the Coast Guard (the city boasts the largest Coast Guard base in the Continental US). As an incentive for tourists arriving by sea, the city provides several free docks near the downtown area where boats can moor for free for the night, and use nearby restrooms, showers for a nominal cost; the community even provides a wine and cheese reception if there are more than 5 recreational boaters tied up. However, David and I admit to looking a gift horse in the mouth–didn’t like the prospect of being exposed to the weather coming directly from the Sound, didn’t like the difficulty in tying up and trying to disembark after tying onto splintered pilings onto a very narrow, decrepit dock. Especially didn’t like the idea of being right in the middle of a section of town which we heard can have some crime and noise. We looked at our “Active Captain” app, and discovered that just after the Elizabeth City drawbridge and around the corner, the “Mid Atlantic Christian University” offered free dockage. We spied the University on the water, headed for it, and were met at the dock by Kathy and Andy who quickly and expertly helped us tie up. Kathy told us where the gymnasium was if we needed to use the restroom or shower, provided a spigot and hose to fill our water tank and even rolled over some wooden steps to make it easier for all of us to get on and off. She even offered us the use of her car if we needed to go grocery shopping! I mean, these people are the epitome of hospitality.

David relaxing on the lawn in front of our dock: 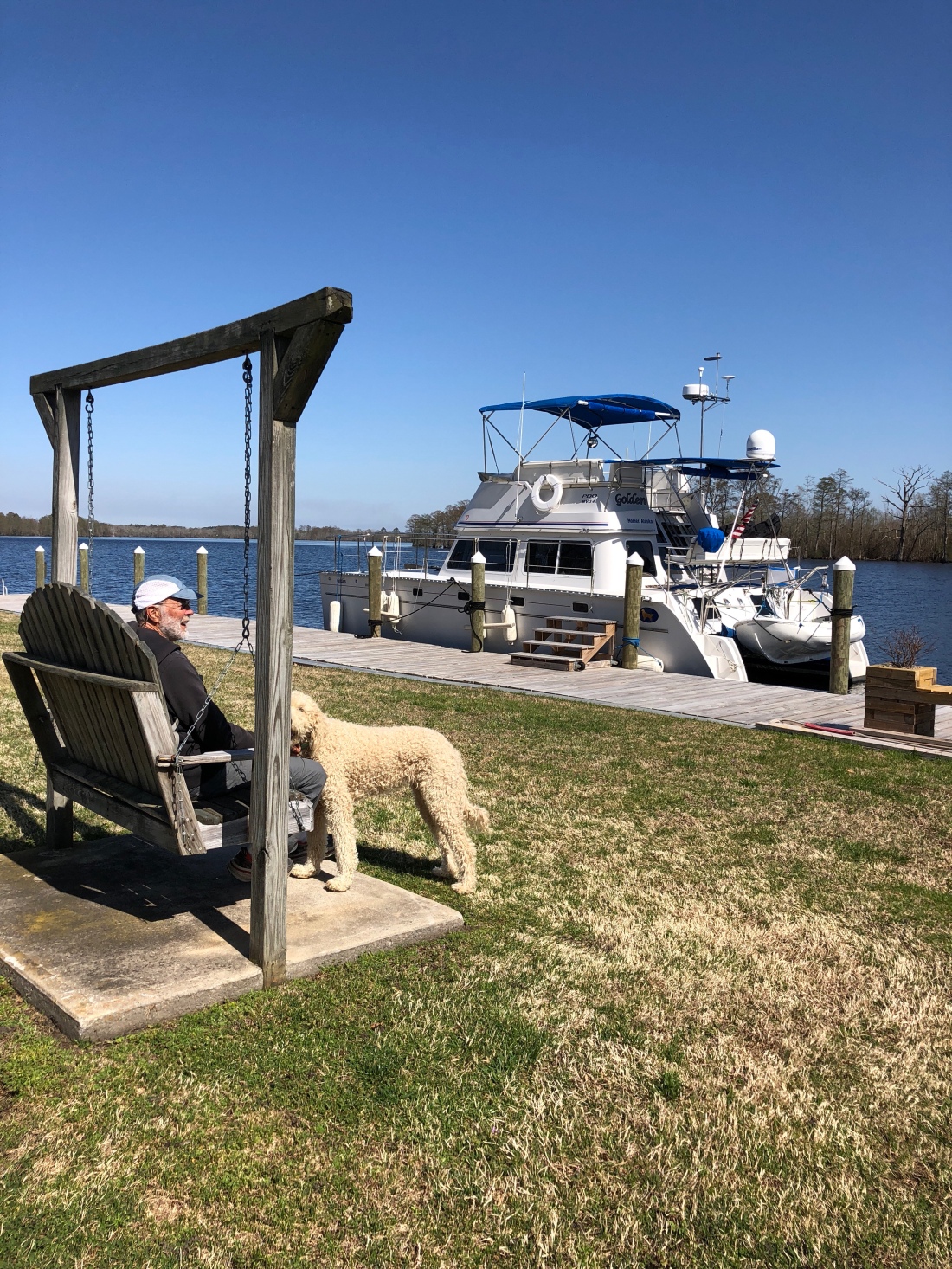 David and I had gotten to know another PDQ owner while tied up together in Florida. Before we’d even looked at Golden, Jim Merritt had considered buying her. Unfortunately for him, by the time he’d made up his mind to get serious and make an offer, she was sold to us.

Jim eventually found and bought another PDQ, and we had gotten to know him and his boat “Gypsy” as we were both tied up in Stuart together waiting for our boats to be prepared for doing the Loop. Below is a picture of “Gypsy”, Jim at the helm, crewmember “Mike on deck, taken while we were waiting for the lock to open:

We met up with Jim again in Alligator River, and we both arrived into Elizabeth City on the same day. He and Mike had moored at the city docks, so after David and I were settled in, we walked a few blocks and joined them to visit the maritime museum. Fascinating museum–brand new–lot of information about the Albermarle Sound and its history. I’d known, but forgotten, that Wilbur Wright stayed in Elizabeth City waiting for a boat to ferry him to the Outer Banks and Kitty Hawk when he was working on his invention. I was also surprised to learn that during World War II, many German U boats lay in wait off the coast of North Carolina in order to bomb large numbers of merchant ships bringing supplies up and down the coast and across the Atlantic–on average a boat per day was sunk, and the inhabitants of this area would often find bodies and detritus from destroyed ships washed ashore. Finally the US wised up and started shepherding the civilian ships as they traveled, and used blimps and airplanes to look for and destroy German submarines. Eventually the Germans gave up and moved on to other, easier prey.

After our museum tour, the four of us went to a local restaurant and enjoyed shrimp and grits and 8 oz pours of wine–end of a great day. We said our goodbyes to Jim and Mike, and headed to our respective boats. Five minutes later, Jim texted that they were headed over to our dock because the wind had kicked up, they were swinging and rolling in the wind, and teenagers were partying in the park next to them. They docked nose to nose with us, and we all enjoyed a quiet night.

The next morning, David and I left fairly early in order to be sure to make the 11 o’clock opening of the lock at the south entrance of the Dismal Swamp. Here’s our track:

We untied and left from our spot in EC at about 8 AM with Mike’s help–a little nerve-wracking because there was a wind, and our two boats were moored fairly close together, but managed to pull it off without an inordinate amount of yelling, and headed down the Pasquotank River towards the Dismal Swamp Canal. We had not been sure whether we should do this portion. You see, the ICW splits at the Albermarle Sound, and one can go through the wider, faster Albermarle and Chesapeake canal or through the narrower, shallower Dismal Swamp canal via Elizabeth City (hence the town’s open armed welcome to boaters). Some had told us emphatically that they would never voyage through the Dismal Swamp– that we’d run aground or into other boats because it was so narrow and so shallow, that it was full of duckweed that would ruin our engines, that we would be eaten alive by biting flies and chiggers and mosquitoes, and that it was incredibly boring. Well, we chose to anyway, and I can say without reservation that I am SO GLAD we did. For one thing, we are transiting at the absolute perfect time. The Canal just reopened a month ago after being closed for over a year after the devastation wrought by Hurricane Mathew. First, over 400 trees had fallen into the canal and blocked passage for boats. The Corps finally cleared those hazards out, and then found that, due to the lack of boat traffic for months, the water had stagnated and filled with duckweed. Duckweed is a foul growth which clogs engine intakes–not a good marketing ploy for the tourists. They had just finished dredging the canal and ridding it entirely of duckweed before they opened. Our two PDQ’s were the only boats traveling north on the canal the day we traveled to the Visitor’s Center where David and I are docked now. Best of all, due to the unseasonably cool and windy weather that we’ve been complaining about relentlessly, there are no nasty flying insects bothering us.

As we traveled north on the river from Elizabeth City, into Turner’s Cut and then passing through the “South Mills Locks” into the Canal proper, we were amazed by the beauty of the landscape and the huge variety of birds and wildlife.

Here’s a view of the Turner’s Cut with cold feet in foreground (yes, it was cold again that morning): 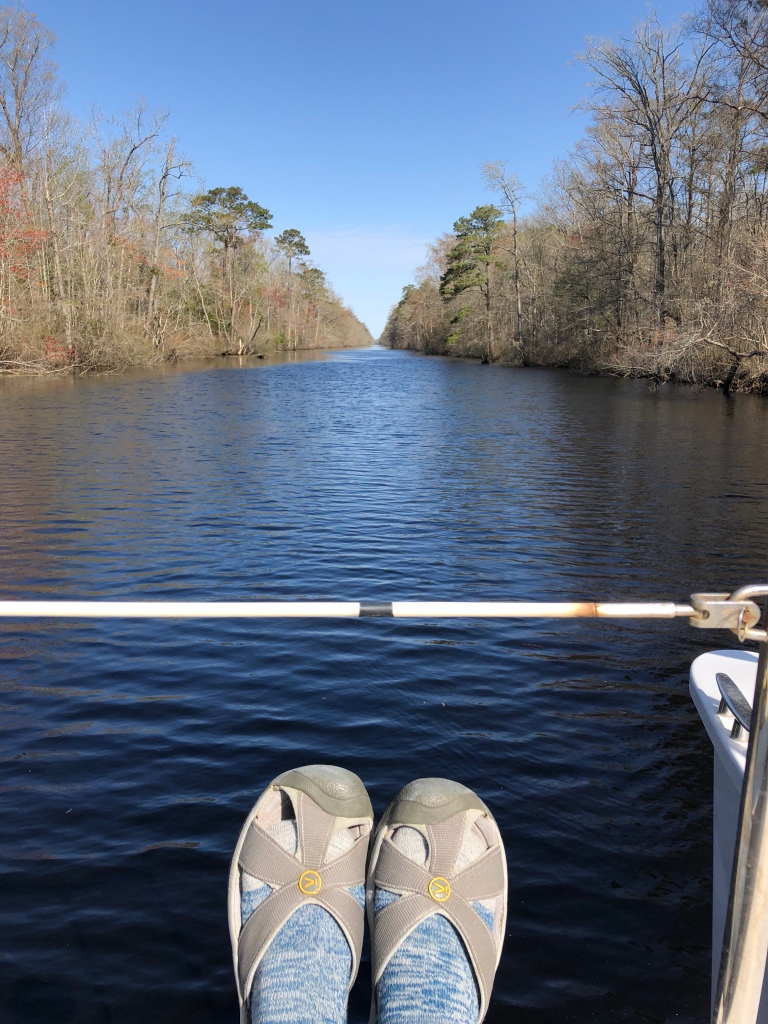 The Dismal Swamp Canal has a fascinating history. Early landowners and investors saw it simply as an ugly, useless impediment to development. In fact, before the Revolutionary War, George Washington joined with several other prominent Virginians and North Carolinians to form a couple of companies which bought 40,000 acres in the area. Investors hoped eventually to drain the Swamp, harvest the huge number of valuable trees growing there, then use the land for farming. After building a couple of smaller ditches for a total of 5 miles, they realized that the task of was enormous and too expensive, and gave up. It would be 60 years after the Revolutionary War before the Dismal Swamp Canal as it stands was opened. The Canal had to be dug entirely by hand, so progress was slow and expensive, and labor was entirely provided by slaves hired from nearby landowners. The only good part (for the slaves) was that they became so familiar with the swamp that it became known as a safe haven for runaways, and eventually there were large colonies of runaway slaves living in its depths. The Canal itself was finally completed in 1805, and is the oldest operating artificial waterway in the US. It is incredibly rich in history and folklore–countless famous explorers, presidents, navigators, writers, and artists have traveled this area–and it has been fun to learn about it.

Oh oh! One more interesting tidbit—the water of the Swamp and Lake Drummond within is known as “Juniper Water”. The water is colored brown because it’s filled with tannic acids from the bark of the juniper, gum, and cypress trees that grow here. Those particular tannins make it difficult for bacteria to grow, so the water maintains its potability much longer than from other sources. For that reason, water from the Swamp was a highly prized commodity on sailing ships; it was stored in kegs and carried on long voyages all around the world. People also attributed more magical qualities to the tea-colored water, and believed it also prevented illness and promoted long life. Be that as it may, it DOES stain; boats traveling in this area are known to have the “ICW smile”, a visible brown stain on their bow.

We arrived at the Visitor’s Center (where we learned most of the above) after 17 miles of slow going–we were told to travel at “idle speed” on the canal in case we bumped the bottom, met another boat, or found a new, unmarked hazard. The visitor center also serves as a rest stop for vehicles traveling the highway nearby–the only rest stop in the country serving both automobile and marine traffic! The woman at the desk of the visitor’s center gave me packets of maps and information, told us the restrooms were open 24/7 (music to a boater’s ears), offered us some free sacks of ice, gave us the code to their WiFi, and in general made us feel very welcome.

The state park visitor’s center was located just across the little bridge across the canal. It had a great museum, more sparkling clean restrooms, and a gift shop. From there we took a short hike on a dirt bike path next to the canal. On the way, we passed a still–apparently the location was a popular place for making illegal moonshine because the swamp was so easy to hide in.

Tonight I made homemade hummus served with crackers and celery sticks, and coleslaw. Jim and Mike have moved on up the canal to get ready for the short hop to Norfolk tomorrow because guess what? The weather is supposed to deteriorate again! David and I are thinking we’ll just stay here, and move on Sunday after it improves. You can’t beat free!