This will be the last post in a few weeks, because David and I are taking a break. I last left you enjoying our free moorage along the Dismal Swamp.

After a cold, miserable, rainy day at the Dismal Swamp Visitor’s Center, we headed north to Norfolk. Though the day was bright, the temps were low, and there was a north wind to slice through. We went through our last lock on the Dismal Swamp, and, to prove we’re not the only whiners on the sea, even the lockmaster complained about the weather! Luckily we only had about 15 slow miles to travel, and we arrived into the “Tidewater Marina” in Norfolk early that afternoon. Here’s the log for the day:

As everyone knows, Norfolk is a Navy town. We saw warships, aircraft carriers, even a navy police boat filling up at the fuel station in our marina. Notice the machine guns at the bow? Don’t tell the the Feds we took this picture. Purely to be polite, we asked if we could, but the captain rudely snarled, “No” without looking at us and walked away. I think he forgot he works for us, not the other way around. Also notice that we bravely took the picture from where he couldn’t see us–we’re not stupid. 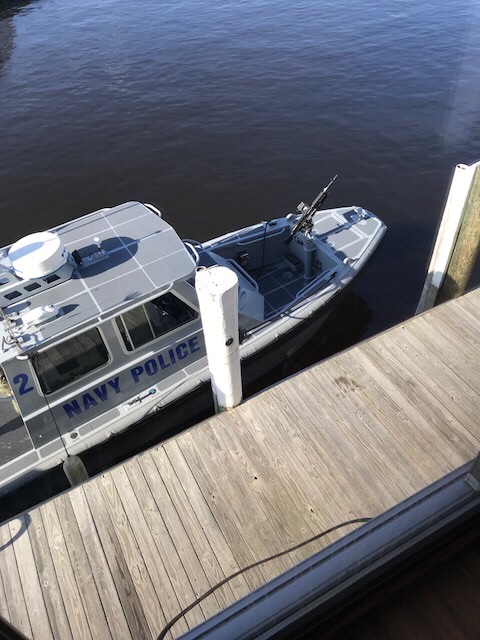 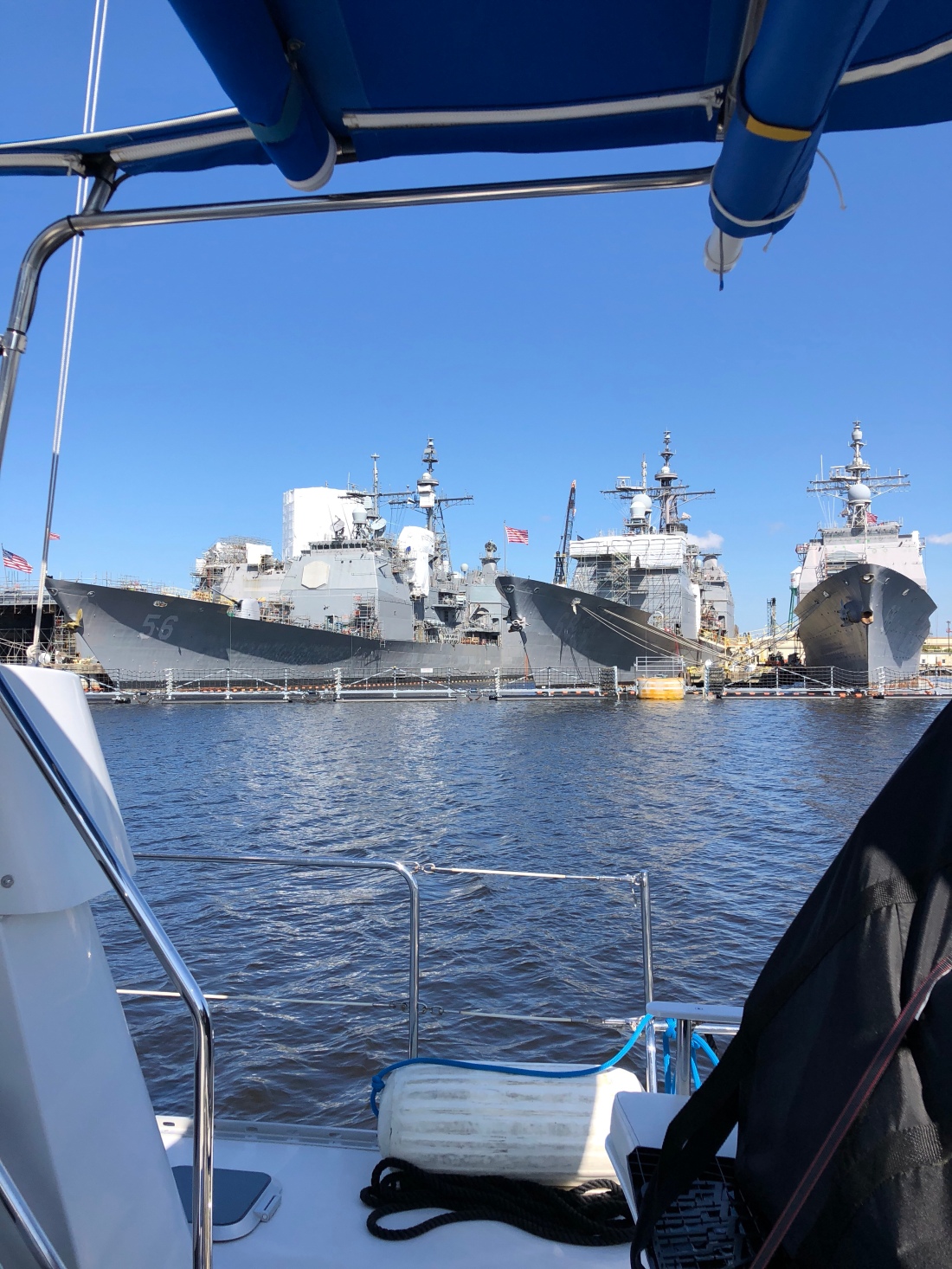 We spent a couple of days in Norfolk, trying to find fun things to do, but finally realized that it just was too hard to work up much enthusiasm for sightseeing in the icy, damp wind. And if I hear one more person say, “But you’re from Alaska–you should be used to cold weather!”, I’m going to strangle them. Well, that may be a bit harsh–at least slap them around a little. Those of you who actually live in Alaska know that spending time outside in temperatures even 30 degrees colder than in Norfolk can often be actually enjoyable–skiing, snowshoeing, ice-skating, trail running, even just walking the dog is fun when you’re dressed appropriately. But there’s something about walking around the center of a big city in 40 degree weather, surrounded by cement, with the wind coming right off the water whistling through every open pore, that isn’t conducive to enjoyable sightseeing. Finally, we admitted our real feelings to each other, gave up the pretense of exploring Norfolk, and decided to proceed as quickly as possible to our intended final destination. So despite it being a very convenient, albeit expensive ($2/foot! $2 for a load of laundry!) resting place, the next day we headed out into the Chesapeake Bay. As we motored out, we could hear two different warships and one aircraft carrier warning everyone listening to Channel 16 that they were on the move out to sea. We wondered if that had something to do with bombing Syria? We should’ve asked the Navy Police captain since he was so friendly and helpful.

Here’s David and I (and my hot chocolate) trying to stay warm at the upper helm–temps in the lower 40’s, oncoming north wind:

Yes, we have a lower (indoor) helm, but we prefer the 360 degree lookout from up top, particularly when navigating through seas of crab pots waiting to snag one of our propellers.

Our next stop was the “Dozier” marina, just outside a tiny town called “Deltaville”. We thought we’d stay there for a few days waiting for good weather, because, again, the wind was predicted to blow too hard to safely travel (story of our lives).

Upon our arrival, the first words out of the Dozier dockmaster’s mouth was “no water on the docks”–apparently we arrived too early in the season. Well, ok, not ideal, but we’ll just be frugal with our water use. That evening, David and I and Hunny walked a couple of miles to what turned out to be a surprising find–“the Table” in Deltaville, a town without stoplights that looked like it maybe had 200 inhabitants. Who woulda thought? It truly was a foodie’s paradise–homemade breads and yeast rolls, tender steamed mussels in an unusual lemon-coconut-curry sauce (lighter than it sounds) particularly tasty when sopped up with their crusty sourdough bread, fresh flounder just lightly battered in panko and then sautéed, smothered with pickled cabbage, homemade tartar, and presented in a house-made brioche–best fish sandwich I’ve EVER had. They offered a variety of delicious salads, such as poached pear, goat cheese, and beet, and David’s favorite, “the Wilton”, which he ordered two nights in a row. At the end of one’s meal, there was an entire bakery’s worth of decadent homemade desserts. The first night, not knowing portion sizes, we ordered in quantities enough for several families and ended bringing half of it home to, truthfully, feed us for the next few days. We particularly liked our waiter, Jeffrey, a garrulous, humorous character who seemed to know everyone in town and provided ceaseless, hilarious commentary during the course of the evening of stuffing ourselves. Of course I forgot to take pictures.

The next day dawned WARM (low 70’s) which meant we could more comfortably explore the area. David and I took a long, meandering bike ride around the peninsula, and visited Deltaville’s fascinating Maritime Museum. It felt good to do something other than sitting and walking. Later, despite having a refrigerator crammed with leftovers, we rode back to our new favorite restaurant, and Jeffrey acted as if we’d been coming for years. He asked after Hunny by name, and chatted gregariously as he poured a free glass of wine, and snuck in an extra portion of dessert. The distance was perfect for riding home, even after a couple of glasses of wine, and we returned happy and looked forward to exploring more the next day. My good mood was quickly shattered, however, when I scurried up to the restroom later that evening to take a well deserved hot shower and found a sign on the door informing me that everything was closed until further notice because there was NO WATER. My mood was not improved when we looked over the weather predictions uniformly describing high winds with higher gusts, and waves building to 3-4 feet–fine for a sailboat, but not for a small powerboat. We only had a little over a week to somehow cross the rest of the Chesapeake and get to Baltimore in time to catch our plane, and there was another storm system predicted to come through right on the heels what we were currently experiencing. We were getting a bit worried about being stuck on the Chesapeake due to weather for the rest of our lives.

The next morning, we looked over the wind/wave predictions once more, and noticed that that very afternoon, the waves were predicted to be only 2 feet tall, and the wind, while blowing 15-20 knots, would be coming from behind (always more comfortable). Since the only thing keeping us in Deltaville was Jeffrey and the “Table”, we decided to go for it–we cast off at 11:30 AM, in order to travel a bit over 60 miles during a “small craft advisory”. Stupid, eh? Unfortunately, my “log” app quit right in the middle of our crossing the Potomac (between 3 and 4 below), so I’m showing you a picture of our navigational plan instead: 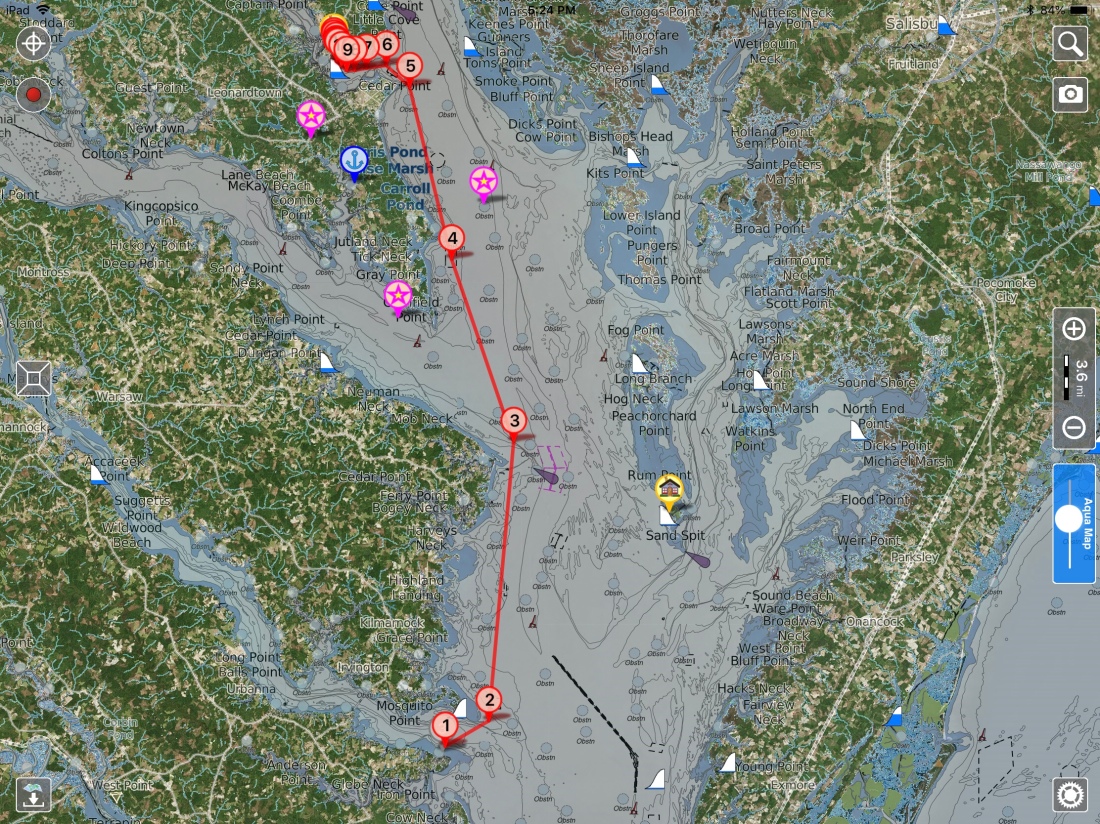 Boy were we scared as we cast off–needlessly as it turned out. We kept fairly close to land in case we needed to duck in. Our biggest worry was crossing the delta of the Potomac River—about a 10 mile expanse of water that can cause a lot of turbulence and wave action, but our worry was unfounded. At a bit after 6, we steamed into our intended destination of the Spring Cove Marina on Solomon’s Island. Of course no one was around to help us dock; doing so was a bit dicey due to the spot not being built for mooring long term. It consisted of a long fixed high wooden dock with tall pilings placed, I firmly believe, at intervals designed specifically to be impossible to arrange fenders in order to adequately protect our boat, and as an added touch, no secure cleats to which to attach lines. The one cleat we found and attempted to use ripped out of the piling almost immediately. We somehow managed to dock—David got as close as he could without plowing into a piling (I helped by screaming when we got too close–my modus operandi), and I managed to duck under the 3 foot high railing and leap onto the dock with a line and get it fastened to the cleat and then, once it broke off, more securely to a piling. Once we get one line fastened, control is much easier because the helmsman can use the line as a fulcrum to bring the stern in, hopefully with a fender or two strategically placed (hah!) to protect Golden’s fiberglass from smacking into and rubbing the rough wood of the pilings. We spent the next half hour bickering about where and how to tie various lines and fenders, but FINALLY we were safely tied up, connected to power, and not dependent on weather to travel for the next few weeks.

We cracked the champagne. Actually we didn’t have enough forethought to have champagne, but we WOULD’VE, had it been available. Never fear, we did enjoy an adult beverage to celebrate. We finally got our long hot shower, and fell exhausted into bed.

Here is a picture of Golden snug in her moorage for the month after we moved her the next morning:

Remember, if you’re ever curious about exactly where we are at any given moment (Mom, that means you), try this site:

Then you can be like my brother Brian and email us every night to inform us where we are.

Why were we so determined to get to this particular place, you ask? The answer is simple–our daughter Tabie is getting married to some guy in early May (just kidding–we love Ben, and he will soon be one of the two best sons-in-law one could possibly hope for). Even if we wanted, we couldn’t miss the festivities because they asked me to perform the ceremony. I’ll bet most of you didn’t know I was a minister. I applied to be ordained online several years ago as a lark, but it turned out to be one of my more fortuitous decisions. It has come in handy; I married our son John to Mandi a couple of years ago, and Tabie STILL wants me to repeat the debacle, I mean, the role. I warned her I’m going to do the EXACT same ceremony as I did for John and Mandi, although as my friend Cindy pointed out, changing the names would be a nice touch. We return to Solomon’s Island on May 9th, and continue our adventure.

5 thoughts on “Safe in Solomon’s”