Apologies for not writing sooner–hard to get back in the saddle again. Writing a blog is work!

Tabie’s wedding was beautiful, and I’ve never seen her happier. I was a bit nervous while performing the ceremony because she kept giving me the side eye. I guess she didn’t completely trust that I wouldn’t embarrass her (I did), but they went through with it anyway. She is officially Mrs Octavia Swanson Lively. 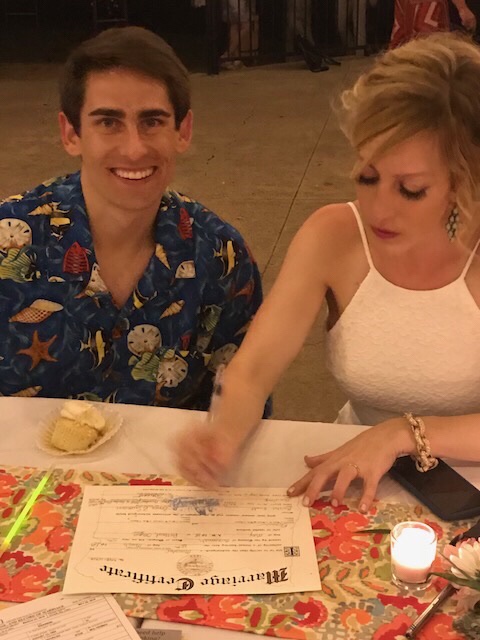 We’ve been back on the east coast since May 9th, but didn’t start traveling until the 16th. During the frequent rain and thunderstorms that greeted us immediately upon our return (no surprises there), David observed there was water dripping from the skylight hatch above the master stateroom. His keen observational skills were assisted by the fact that the water was actually dripping onto his face. We discovered that when the hatch cover had had been replaced in February (because of a crack in the plexiglass), it been improperly re-sealed. We knew that that mistake had to be rectified because we were also clever enough to predict we just might continue to have a drop or two of rain sometime during the remainder of our voyage. Here’s “Chip”, doing the job right (we hope):

While we waited for the repair we explored the surrounding area by car. One day we Uber’d over to historic St Mary’s (first capital of MD, AMAZING historical re-creation of the town in an open-air museum). 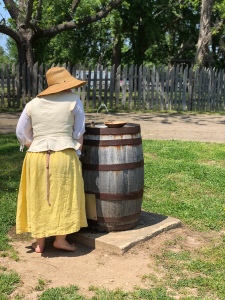 Another day we rented a car to visit Annapolis. We took a couple of hours to tour of the Naval Academy, including their dorms, their mess hall, the chapel, and the grounds, all of which were incredibly impressive. Of course I didn’t take enough pictures–just had David snap one of Bonnie Paul Jones:

On our way to St. John’s College, where we had heard there was a good place to let dogs swim (it was hot), we walked by the old State Capitol building. This was where George Washington submitted his military commission after the Revolutionary War, rather than allow himself to be designated king or dictator, a refreshing display of principle for which he’d probably be sneered at as a “loser” by the current administration.

We finally left Solomon’s on the 16th May, and traveled north on the Chesapeake Bay, stopping first at Knapps Narrows, then to Rock Hall (here’s a picture of me on an oyster shell pathway–this is, or was, oyster country): 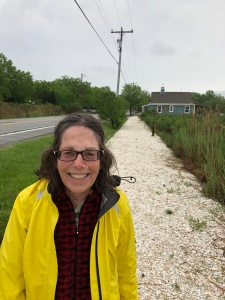 then down the canal connecting the Chesapeake Bay to the Delaware (oddly enough called the “Chesapeake-Delaware Canal”). Stayed in Delaware City, MD for a couple of days, and FINALLY started meeting other Loopers. Especially enjoyed meeting Bruce and Janet don’t-know-their-last-name-yet, primarily because they also enjoy biking and we went for an hour’s ride on the path along the C and D Canal together. On the way, stopped for a friendly turtle crossing the bike path: 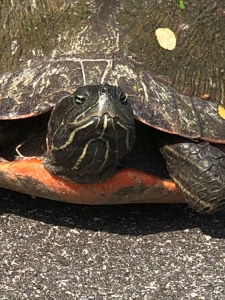 Bruce and Janet are also PDQ owners, and Bruce is an anesthesiologist, so we have much in common.

The main reason we stopped in Delaware City is because “Tim”, the dockmaster at the marina, gives a 5 PM briefing every day on what to expect going down the Delaware, which can be a difficult transit. If you’re smart, you listen carefully to his advice. Here he is showing us predicted current, tide, and wind for next day:

Also at same marina, I found a wall hanging in the laundry room that I enjoyed. Not sure if it’s legit, but, as an old person, I appreciate its wisdom nonetheless.

From Delaware City, we turned south down Delaware Bay. Passed lighthouse on way:

We arrived early afternoon into Cape May, a town jutting out into the Atlantic from the Delaware. We walked into town, and enjoyed a seafood dinner on the back deck of a take-out establishment that we discovered:

From there, it was decision time–whether to venture out into the open ocean (pros: faster, more direct, no worries re running aground; cons: scary as shit). Most people do go through the NJ intracoastal waterway, but that portion is not dredged very often, and if you’re not REALLY careful to watch all the navigational buoys and the tides, may (and often do) touch bottom at the least, or run aground at the worst. The portion of the ICW from Cape May to Atlantic City is especially notorious for being skinny and shallow. We decided, after making sure that all of our 10,000 apps predicted the same decent wind and waves, that we would venture out into the Atlantic. We left early in case we decided to hightail it back inside if anything went wrong. Fortunately, the sea gods were with us, and we had an uneventful ride, steaming into the Atlantic City harbor before noon! I REALLY enjoyed boating on the Atlantic–for the first time, I felt like we were really boaters instead of picking our way down a boating highway. Here’s a picture of our approach to Atlantic City:

Since we were so early, we decided to continue on for a bit. I think we may have overdid it–we ended up going nearly 150 statute miles that day, eventually settling in on the “Forked River”. Of course the last several hours were passed in pouring rain, with a seasick dog (more on that later). Today (Wednesday) we just have a short distance to another river, the Manasquan, where we’ll stay overnight before heading to NYC.

Hunny is most definitely not a salty dog. Having frequent thunderstorms on the Chesapeake Bay started a cycle of cowering and shivering during the storm, despite us doing everything in our power to make it less scary. Then, whenever it rains, the canvas tops over the flybridge and stern deck will fill with water, then suddenly without warning will spill with a CRASH. So that made thunderstorms, especially if accompanied by a shower, even MORE scary, and we think it escalated from there. She also has become more sensitive (seasick?) to wave action. So now, whenever it rains and/or is just a tiny bit rough, she starts shivering and cowering, runs to me and looks at me with her sad eyes as if to say, “TAKE ME OFF OF HERE–NOW! We luckily have some anti-anxiety meds to give before vet visits (yes, she also has a vet phobia–Hunny is neurotic, I admit it). We started giving her a bit to alleviate her excessive anxiety on rough or rainy voyages, as well as forcing her into the stateroom where it’s dark and more stable, and, while she’s not happy, at least we know she won’t commit suicide by throwing herself off the boat. Now whenever we come into port, we arrive with a drugged out, staggering, drowsy canine that spends the next few hours sleeping it off.