We left Rause’s Point at about 9 AM on Saturday AM, and a few minutes later crossed into Canada. I was too busy putting away lines and fenders to notice, but David said there was a small buoy in the center of the Richelieu River informing him of the borders location. A few minutes later, we tied up at the dock in front of Canadian customs.

We presented ourselves to the two border patrol agents there, showed them our boat’s documentation, our passports, and Hunny’s proof of rabies vaccination, and were set free to roam into CANADA. This was a moment we’d been anticipating even before we started this trip, having heard from multiple sources that the Canadian portion of the Loop is considered by most to be its highlight. As Alaskans who enjoy cool weather, mountainous terrain, and multiple opportunities for physical activity, we suspect that we will agree.

After the border crossing, the Richelieu River gradually narrowed, and soon we arrived at the first lock of the Chambly Canal. This canal is a narrow one, about 20 km long, dug alongside the river to allow small craft to travel downriver without navigating dangerous rapids on the way.

We’d been a little nervous about transiting locks in a non-English speaking province, but as usual, our fears were unwarranted. The lockmasters were incredibly friendly and understanding of our fumbling attempts to do what they asked. Hunny is also the best ambassador—demanding to be petted, making them laugh by enthusiastically licking their faces as they knelt to hand us lines, and in general, just being a happy, loving, goofball. Plus she IS mostly French (poodle)! At our last series of locks, we were told that she was “very popular” with the lockmasters, and that as we’d progressed, all were being forewarned by radio and were excitedly anticipating her arrival.

There are a total of 9 locks on the canal. With gates closed, each lock is only 100 feet long and 30 feet wide at most, so usually, only 2-3 pleasure boats can transit at one time. When you enter the first lock at either end, you are guaranteed of getting through all 9 of them that day if desired. However, because of low staffing on weekdays, boats are only allowed to enter the lock system at two times–9:30 and 1:30. Luckily, David and I had (not by cleverness, but by dumb luck alone) arrived on a weekend, when they are staffed adequately to allow boats to enter on demand. So, despite having arrived at noon and expecting to have to wait until the opening at 1:30, we were allowed to enter just a half hour later behind the 40 foot trawler, the “Karen Ann”.

Following are pictures of Golden being readied for the lock. The first is of us entering; in the second, I’m being handed a bow line, attached to the top of the lock (pictures courtesy of David and Karen Webb, owners of “Karen Anne”: 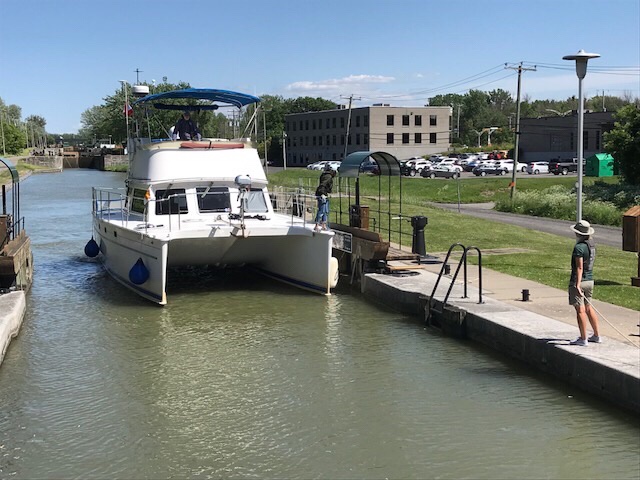 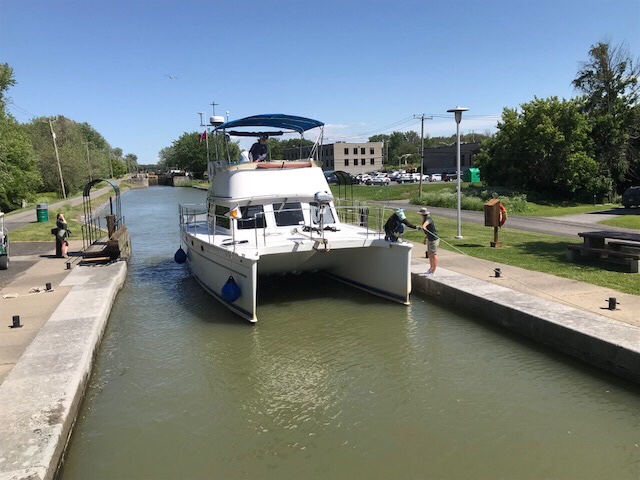 The wind was blowing from the north (the direction we were headed) so it took quite a bit of strength for us to prevent the boat from being blown backwards into the lock gates just behind us. One is usually not supposed to cleat a line when in the locks (in case they need to be let out quickly as the water level drops), but the boat was so heavy, and the wind was so strong that I did anyway, at least at first until David had hold of his line at the stern. It was quite a process for him–once I took the line from the lockmaster at the bow, David would run down from the flybridge, take the stern line handed to him, cleat it loosely, run into the cabin and turn off both engines, then run back out, and uncleat the line to manage it. Only then would the lockmasters start the procedure of lowering the level of the water to match the water downstream. The mechanics of opening and closing the lock gates, as well as allowing water to flow in or out, were entirely controlled by hand cranking. Here’s a short video of two lockmasters letting water out of the lock and preparing to open the gates:

Once we passed the first lock with the Karen Anne, we were instructed to stay together as we proceeded, in order to expeditiously pass through the next 5 locks together. Not hard, as speed limit was 6 mph. After we exited the first lock, we entered the Chambly Canal proper and found ourselves in heaven. Our narrow waterway took us past well tended houses in the French style, surrounded by flowering plants, many with small docks in front used not for boats, but solely for sitting in the sun on the canal. There were what seemed like hundreds of smiling cyclists on the bike way beside us, all seemingly rural. There was not a freeway to be seen. 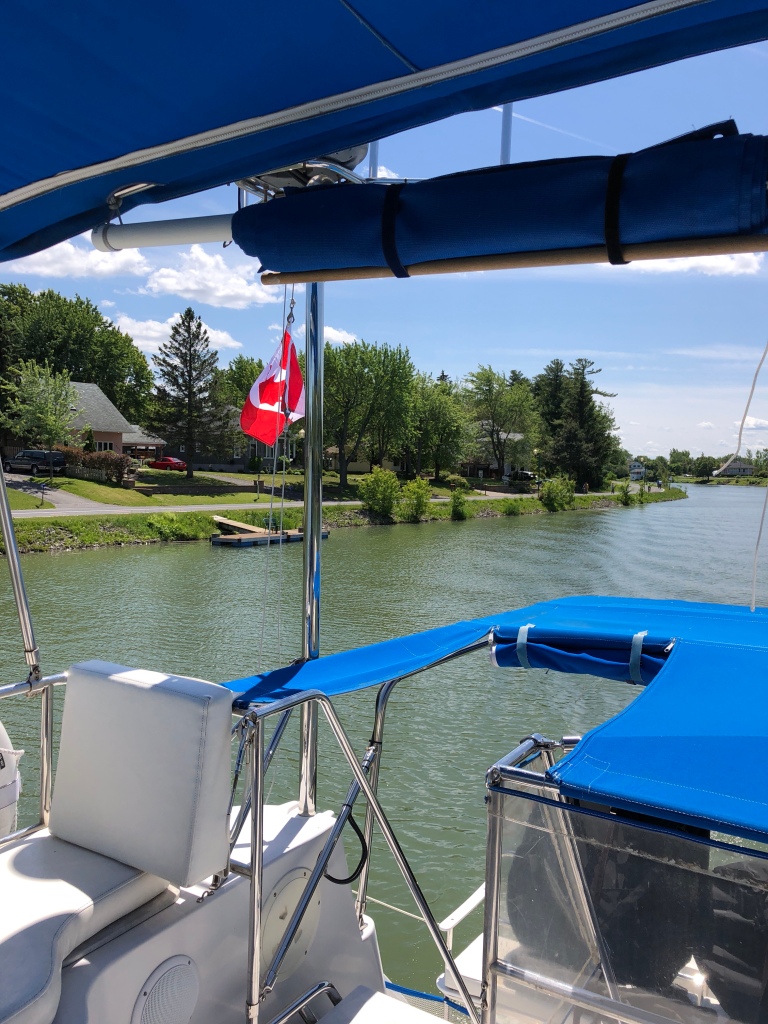 And we knew we were in a different country, because suddenly, over the VHF radio, everyone spoke French!

Some of the locks after the first one we went through were very close together–sometimes only the equivalent of a city block apart. Thus, after locking us through one, the lockmasters would run down to lock us through the next. We therefore got to interact with the same lockmasters several times (and so did Hunny). Here’s a photo of the two we saw most: 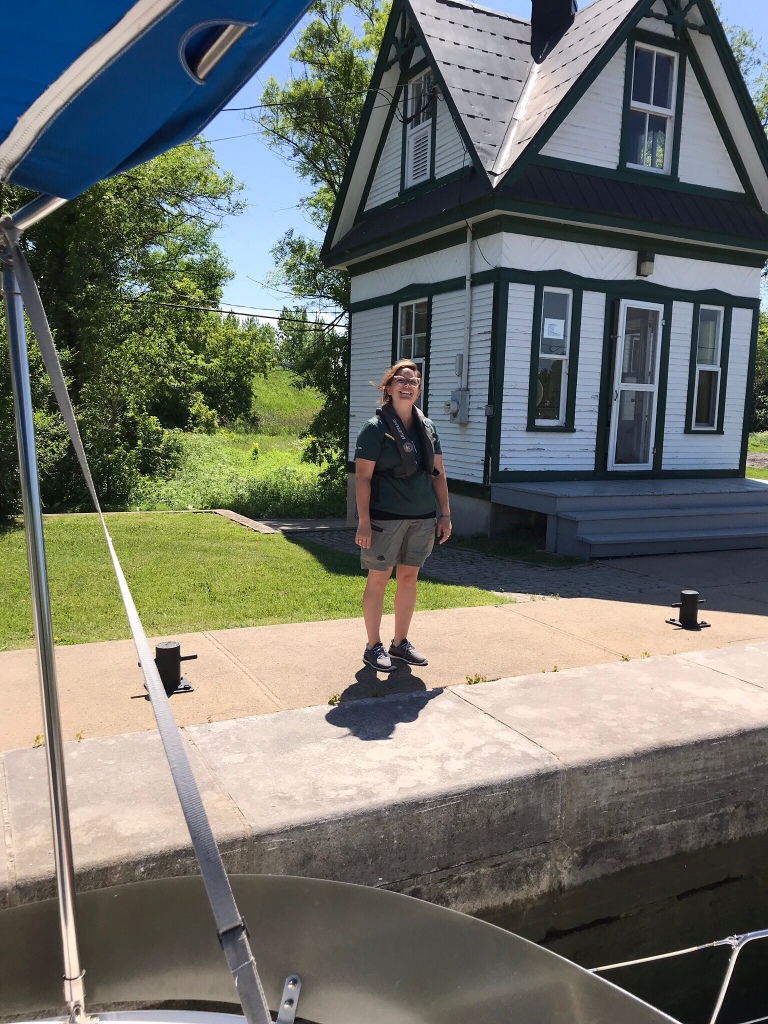 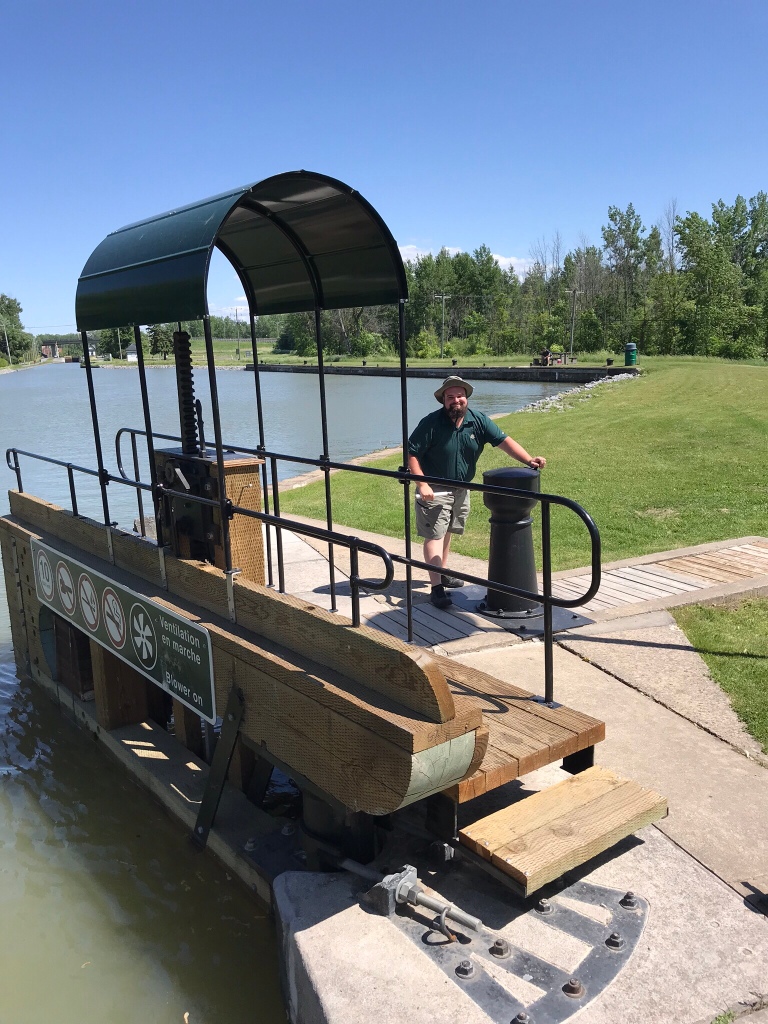 We knew that there was a dock wall available for mooring in the small town of Chambly (hence the name of the canal) before the final three locks, where boats could stay overnight for free. There was even electricity provided for $9 (Canadian)! Naturally, we elected to stay overnight, along with the Karen Anee and another Looper who joined us later that evening:

Chambly was a lovely lovely spot to stay (picture taken not 5 feet from where we moored): 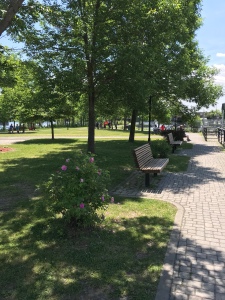 Here’s a video of someone playing a public piano set alongside the main street in the center of town:

Not only was the town itself beautiful, it also offered amenities closest to all of our hearts: a HUGE park next to the canal where Hunny could run and chase balls and squirrels, miles and miles of bicycle pathways along the canal and river to explore, clean 24 hour restrooms nearby, and most importantly, excellent food options. A few blocks from where we were moored, we found a grocery store that resembled the finest farmer’s market–live lobster, fine cheeses from all over the world, and a dizzying array of smoked meats and pate’s. There were also multiple restaurants, all highly rated. We were happy.

We spent Saturday night at the free dock just before the final locks in Chambly. We would’ve spent the next night as well, but the lockmasters discouraged that plan. They explained that because the next day would be a weekday, they couldn’t guarantee we could get through the locks for a week if there were a lot of boats coming through the only two openings per day that were offered. We had noticed a marina right around the corner from the last lock, so we arranged to stay there instead. It was literally steps away from the wall where we’d stayed on Saturday.

So Sunday morning, we watched the Karen Anne and another boat lock through the last three locks, and then followed a half hour later. These locks were a “stairstep” design–each lock was only separated from the one ahead by the next lock’s gate, so it was literally like walking down a 3 step staircase until finally leaving the canal. Poor David got a workout, because they still required him to turn off the engines within each lock. Here is a picture–you’ll have to use your imagination because it was the best we could do: 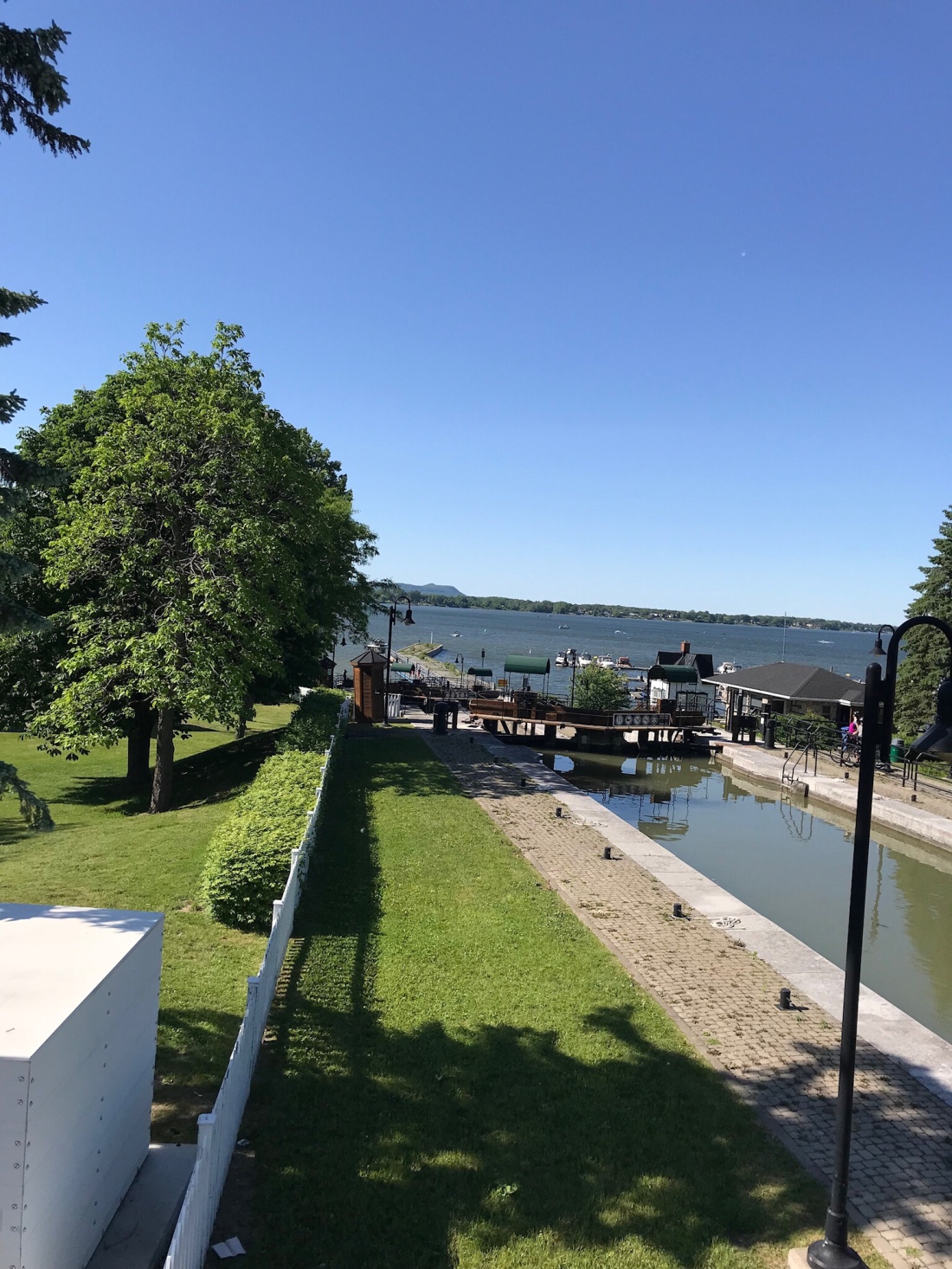 I also took a picture of the number of bicyclists that accumulated within the few minutes the draw bridge over the canal was closed to traffic:

This is definitely a biking town, at least on a beautiful Sunday morning.

After leaving the canal, we immediately turned right and entered the Marina Chambly. The facilities are very similar to those in the US–showers, pump out, restrooms, laundry–except the laundry is FREE and the mooring fee is relatively inexpensive. We spent the rest of the day settling in, taking a long bike ride along the canal (here’s some pictures taken from same area as those we took from the boat, from a different perspective): 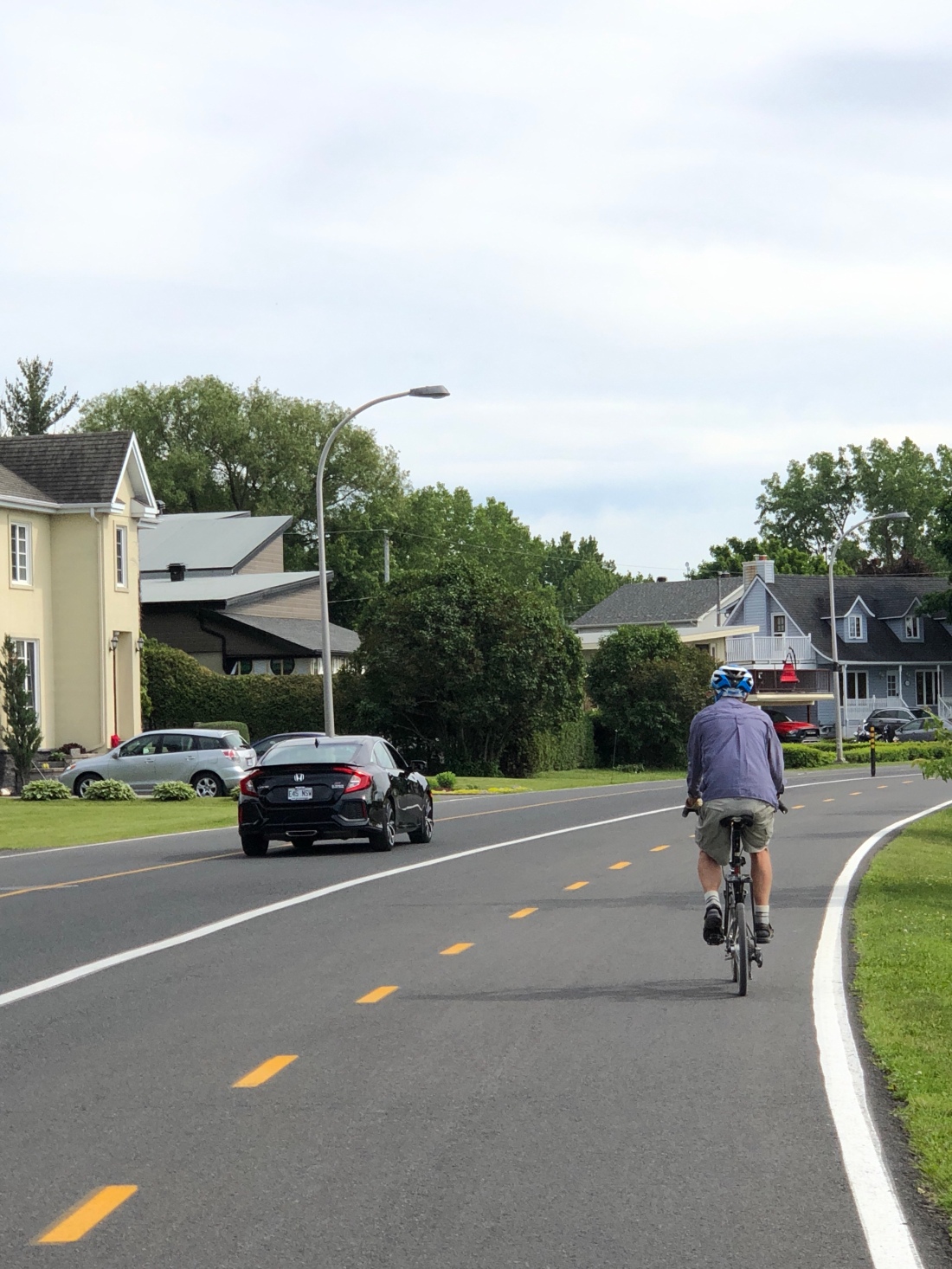 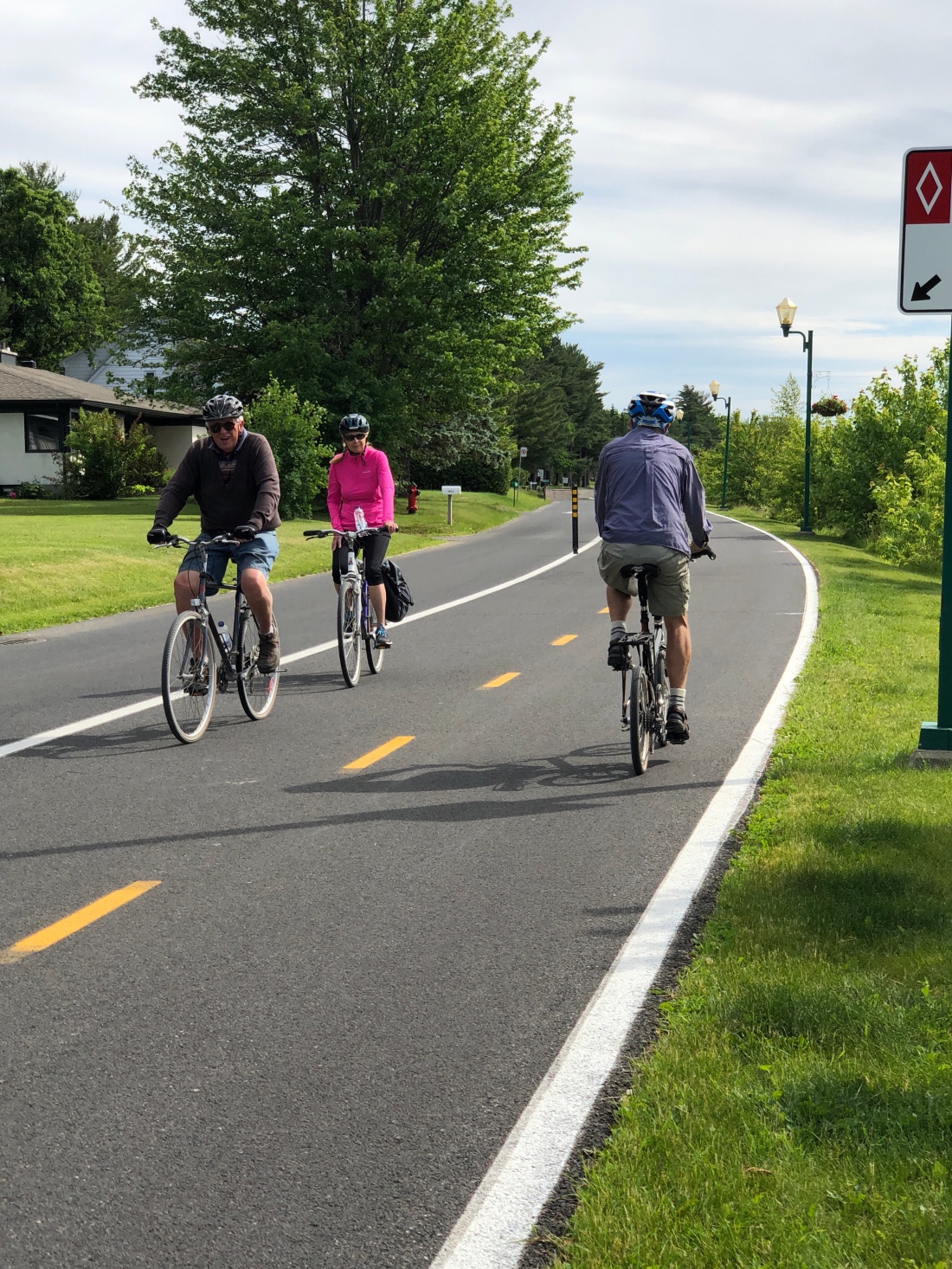 Notice the bike lanes are wider than the roadway. Seems reasonable to me!

We dined out that night on grilled octopus (me) and the best roast chicken David has ever tasted. With the current exchange rate (30%) prices here seem very reasonable.

And here we will stay until our friend Bill Hauser joins us around mid week. He bravely agreed to ride with us from Chambly down the St Lawrence Seaway to Quebec City, then fight the current back to Montreal, where we’ll part. Bill has been learning French (or re-learning, since he had a smattering when young) so he’ll act as our translator if needed. We have read that the stories about unfriendly francophiles in Quebec are highly exaggerated, at least among the boating crowd. We have certainly not experienced anyone remotely unfriendly to our foreign ways and language so far, but we are still fairly close to the border. We will see.