For the last few days we’ve been plying the “Thousand Islands” area. We’ve been told since we started how special they are. Well, to be perfectly honest, we are unimpressed. Yes they are beautiful–small coves, granite rocks right to the edge of multiple islands, lots of different bird species, deer, and other wildlife (unfortunately including insects). HOWEVER, because it’s relatively easy boating to fairly large population centers and to boaters traveling the Rideau and the Erie Canals, if there are 1000 islands, there’ve got to be 1,000,000 boats. I think we’ve been spoiled by our last few weeks on the Rideau. The Thousand Islands are simply too crowded for us.

The day we left Kingston, we boated over to, and toured, the Boldt Castle, also a bit of a letdown after the hype. We found that the tour consisted essentially of oohing and aahing over a mammoth, astronomically expensive house in the shape of a castle that, honestly, any fabulously wealthy person could have built if money were no object. It was paid for by George Boldt, the hotel magnate and proprietor of the Waldorf Astoria Hotel in New York as a monument to his wife in the early 1900’s. Unfortunately she died before its completion, and George never returned. The castle sat there doing nothing but becoming a ruin for 73 years, defiled by vandals and squatters, until it was sold to the Thousand Islands Bridge Authority, which began rehabilitation in the 1970’s. Now it is an extremely popular tourist destination, with every part of the extensive docks in front crammed with tour boats and private boaters (like us), fighting for space, all paying good money to go tour the castle and the extensive grounds (a little extra to see the “yacht house”). We ended up staying a couple of hours, and much of that time was spent helping another Looper, get his trawler into a tight parking spot nearby.

It WAS interesting to see how the upper classes and their servants lived in the late 1800’s/early 1900’s—but anyone who has watched Downton Abby has already been well educated on that score. Vandals are apparently still trying to sneak in some graffiti on the portions of the castle that haven’t yet been renovated. Here’s one graffiti artist’s opinion:

A bit disturbing, no?

Incidentally, it was a cook working on one of Mr Boldt’s yachts, “the Duchess”, who was directed to make something special honoring the Thousand Islands, and voila! Thousand Island dressing was born. Apparently it was also served in the Waldorf Astoria, most likely cementing its popularity.

We left Boldt castle and the USA, and headed back to Canada. The main reason we returned to Canada so quickly is because the US just doesn’t have the excellent inexpensive boating facilities we’d gotten spoiled by in Canadian waters. I haven’t counted, but there are scores of small national park sites sprinkled throughout the Canadian portion of the Thousand Islands–all with well maintained facilities such as deep water docks with sturdy cleats, picnic tables, barbecues, and toilets. The nightly charge is nominal–less than a dollar a foot– but by buying a Parks pass at the beginning of the season (at an early bird discount too!), we can stay at any Park facility without paying extra.

However, rather than staying at a park that night, we headed towards an AGLCA members’ summer home (he was in Florida), who’d kindly offered to share his dock with other members. His house and dock were located on Hill Island, a well protected spot in a scenic location. 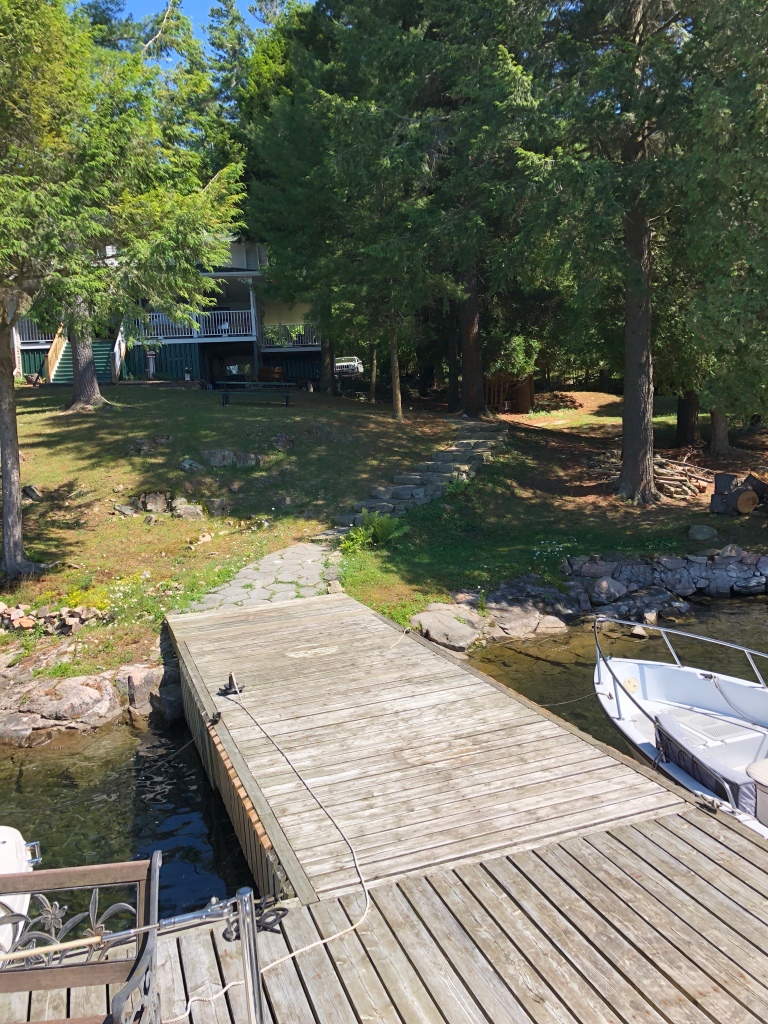 We swam, but were surprised to discover how much colder the water of the St Lawrence River was compared to the Rideau! On the other hand, it is clearer.

After our overnight stay at Jeff’s, we boated a short distance to the small town of Gananoque. We did nothing special there– simply walked through the town, pleasant despite the heat, and ate dinner that night at an excellent Italian restaurant, The next morning we headed back towards the Kingston area, hoping to find an empty spot in one of the Parks Canada locations. After several unsuccessful attempts, we finally found an empty dock in a tiny bay on Cedar Island. We wondered why the dock was empty, because it’s a beautiful spot, fairly well protected, with amenities like a composting toilet and hiking trails to explore. Later we were told that this place is way too shallow for most, and there are sub-surface rocks to pick one’s way through to get to the dock. Because we have such a shallow draft (2 feet, 8 inches) we’d blithely avoided the dangerous obstacle course that scared larger (and probably smarter) boats off. We’re going to have to get re-trained when we get a boat with a more normal draft. There used to be a much larger dock, in deeper water next to the one we stayed on, but like many of the Parks docks around here, it had been heavily damaged during last year’s unusually high floodwaters. Here’s picture of old dock:

We were greeted by a couple who’d used a paddleboard to get to the island and explore. They let us try it out, and David and I are now in the market. Here they are paddling back to where they left their car:

At first we docked bow first, but the dock was so short that our normal means of exiting the boat, our swim steps, extended well beyond its end. Since Golden’s deck rose at least 5 feet above the wooden dock, David and I had to use a tall step stool to get down onto the dock (or sit down and jump). That situation would just not work for Queen Hunny. We first carried a (heavy, wooden) picnic table onto the dock next to our boat, but since the table was just about as wide as the dock, that meant that no other boaters could exit their boat unless the occupants were 3 inches wide. So, after making sure we would have enough water beneath our propellers, we spent a half hour turning the boat 180 degrees just so Hunny could get off and on more easily. Having a dog onboard is a pain.

Actually we were in the middle of turning the boat (me holding onto a line tied to the bow on the dock, while David backed out, turned around, then we both took turns pulling on the bow line (me) and using the engines to bring our stern into the dock (David). Right in the middle of David’s backing and just starting to turn, a tiny inflatable with a 2 hp engine appeared, scooted quickly under our dinghy about 2 inches from our boat’s rear end, and zipped into the dock right where David was attempting to back in. Right after the driver bumped up against our intended docking place, he looked up, and gave me a triumphant smile, as if to say, “see how skillful I am at maneuvering this tiny boat?”. After we rather emphatically told him what it was we were trying to do, and asked him to move to the other side of the dock, he quickly complied, but spent the rest of the time barking orders at me, saying things like, “lower that fender a bit!”, and “tighten up the bow line”, which was a bit maddening, primarily because we had been doing just fine until he’d poked his nose onto “our” dock. We actually ended up enjoying a long conversation with him (his son didn’t speak English) and learned a lot about his home area in Quebec, but I could’ve cheerfully strangled him at our first meeting.

After spending an hour or so relaxing on the boat and swimming, we went for a walk around the island. Saw the clean, no-smell composting toilets,

the other docking site on the island which provided much deeper water but thus was crowded with several boats, and pleasant camping sites, with barbecue grills and picnic tables scattered throughout.

We had the place to ourselves for the rest of the afternoon and all night long–heaven for introverts. For some reason there was a fireworks display above (I’m guessing) the Royal Military College to the northeast. We enjoyed the show, but of course Hunny crept down to the stateroom to cower.

Here’s a short video taken to show how peaceful the next morning was. Turn up your sound to hear bird songs…

We spent hours relaxing (David) and working on the blog (guess who?). Just as we were thinking of leaving, a gaggle of teenagers taking sailing lessons and their instructor in a skiff pulled to the other side of our dock. It was quite the scene watching them sail in and tie up. They didn’t even hit our bow more than a few times when coming in–must be experts!

Now we’ll start wending our way west towards Trenton, Ontario. We plan to be there on the 18th, clean up the boat a bit, do laundry, have Hunny groomed, rent a car and pick up our 8 year old grandson Theo from the Buffalo airport on the 21st. We’re excited to see him and have him travel the Trent-Severn canal to Georgian Bay with us! I may have him help me write this blog–it’d be fun to have another perspective.

2 thoughts on “The Thousand Islands”