Well, since I last wrote we’ve really just been killing time, exploring Lake Ontario and tributaries before we head to Trenton. We left our idyllic spot on Cedar Island, headed almost directly across the St Lawrence to Wolf Island, where we tied up in front of a restaurant that allowed free moorage if you ate there. We were happy to oblige. Although there was no power or water, we could use the generator for power if needed to run the A/C or oven/microwave (we didn’t at that time of day). There was not much in town except a few restaurants, a convenience store, and a ferry terminal, but it was fun to walk around, and the price was right. Here’s a view from the restaurant’s patio where we were moored:

Guess what we were doing while on that patio?

Here’s a sunrise the next morning:

From Wolf Island, we proceeded east on Lake Ontario until we got to a long bay which extended south. At the southernmost end of that bay, we tied up at the Picton Marina. This marina offered power, good water, garbage and recycling, and most appreciated of all, a washroom/shower house precisely 23 steps from where we moored—hallelujah! We spent a couple of enjoyable days there.

The first afternoon we braved the heat to walk up the hill to eat a late lunch outside (had Hunny with us). After that, we came back and turned on the A/C to try to ease Hunny’s suffering, and stayed on the boat reading and doing various chores for the remainder of the afternoon. If Hunny could understand, she’d be counting the days til her next haircut. Here’s a picture I had to share of me and Hunny sleeping in: 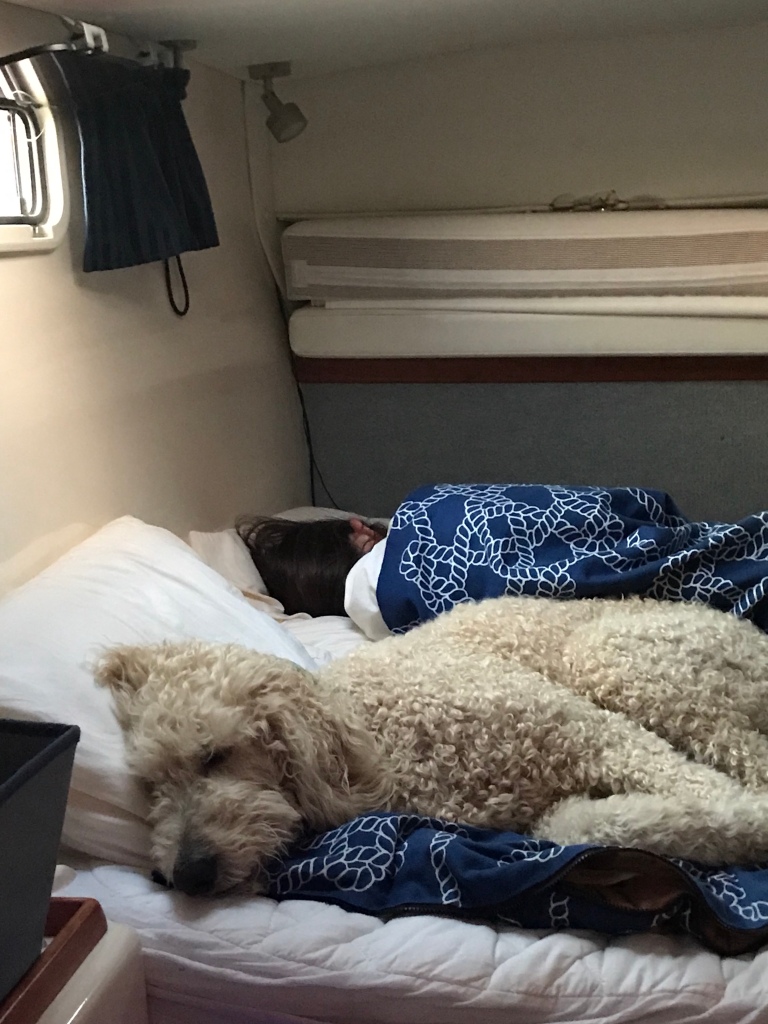 The second day was cooler, so David and I put the bikes together and rode a few kilometers out of town to a winery we’d read about–the Black Prince. Turned out to be a great experience. Not only was there the winery, which offered wine tastings as well as a retail shop, but it turned out that there was a complex of other separate, but related, businesses on site. There was a cooper, who makes the barrels for the Black Prince wines, who also got interested in making vinegar. He offers tastings of the 6 or 7 he makes; several were, in our opinion, exceptionally good. The process sounds very similar to the making and feeding of sourdough starter, but instead of a “starter”, vinegar makers use a “mother”. He claims that new world grapes cannot create an artisanal “mother” (I have not been able to confirm); his “mothers” are imported from Italy and happen to be hundreds of years old. Here’s a picture of the cooper/vinegar maker:

In addition to the creation of wine and vinegar and barrels, the complex included a wood burning pizza oven, cooking up the best, most authentic pizzas I’ve eaten on this trip, if not since eating one from our son-in-law Dan’s pizza oven. David and I ordered their special–one pizza and any 2 glasses of wine you wanted–and sat on the deck overlooking the cooperage to enjoy our late lunch. 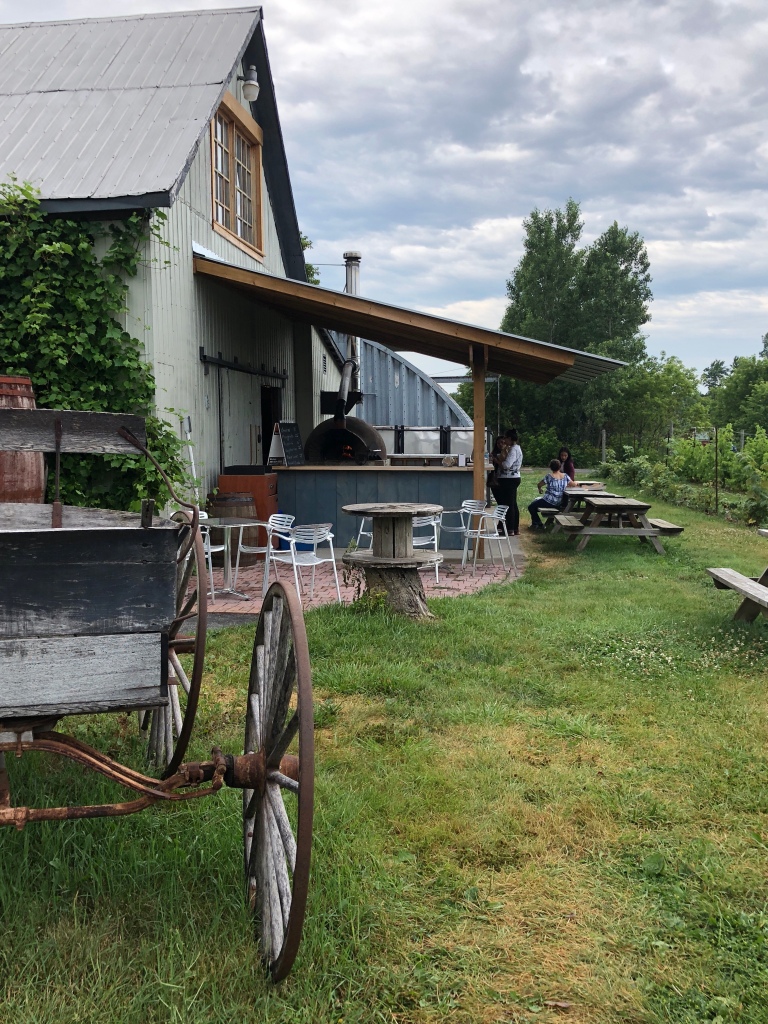 Afterwards we biked home, straining the seams of our panniers by lugging 4 bottles of wine, 3 liters of vinegar, and various sundries we picked up at the grocery store. Riding with all that weight and glass was not an easy task, especially after a couple of glasses of wine, but we managed.

One of the advantages of mooring next to a park, as we usually do, is meeting some locals who come to walk their dogs, have a picnic lunch, or just catch some breeze off the water on a hot day. The morning of our second day, we watched several participants in a “Rubber Ducky Poker Race” glide by. Here’s one: 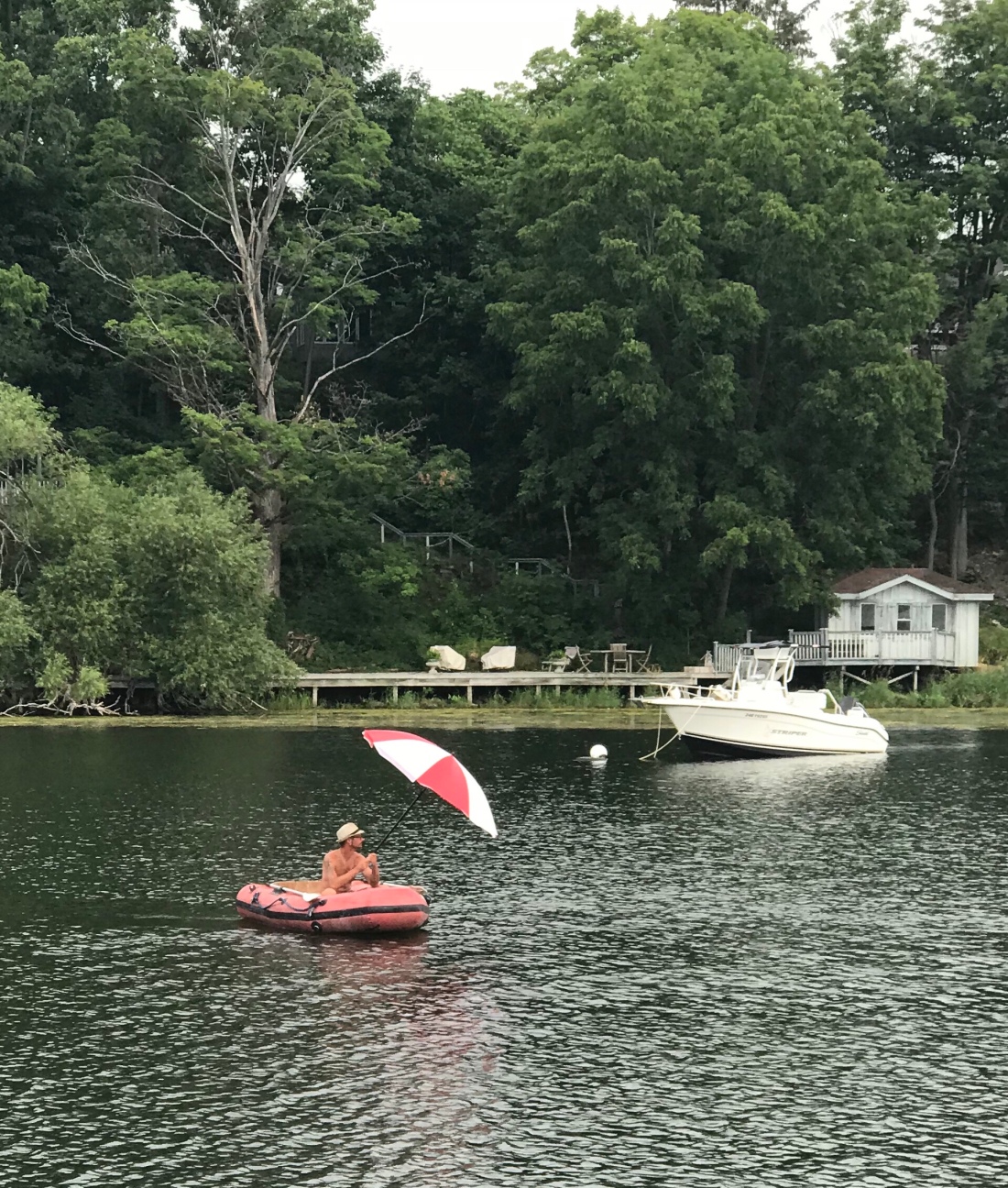 One of the couples we met while moored, Cecil and Martha Downey, along with their disabled daughter and nanny, had driven to Picton in a small powerboat from their home further north on Lake Ontario. The four of us really “clicked”–David and I were actually on our way to lunch, but ended up staying and talking to them for over an hour. They convinced us to consider visiting a tiny town a bit past their house, up a shallow river called “Napanee”. It helped that they used the magic words: “free dockage” and “dog friendly, fabulous restaurant with patio”.

So the day after our bike ride, we packed up and headed north towards the Napanee River. That voyage was scary, as none of our charts indicated ANY depths along the way–just an outline of the river colored beige from shore to shore. Luckily, we found red and green buoys to guide us, and never saw any depths less than 7 feet. When we finally reached the little town of Napanee, we were happy to find everything as the Downey’s described– sturdy docks and cleats alongside the town waterfront park, power, clean restrooms, and only a short walk across a bridge into town and the restaurant across from us.

Picture of our boat moored at Conservation Park in Napanee: 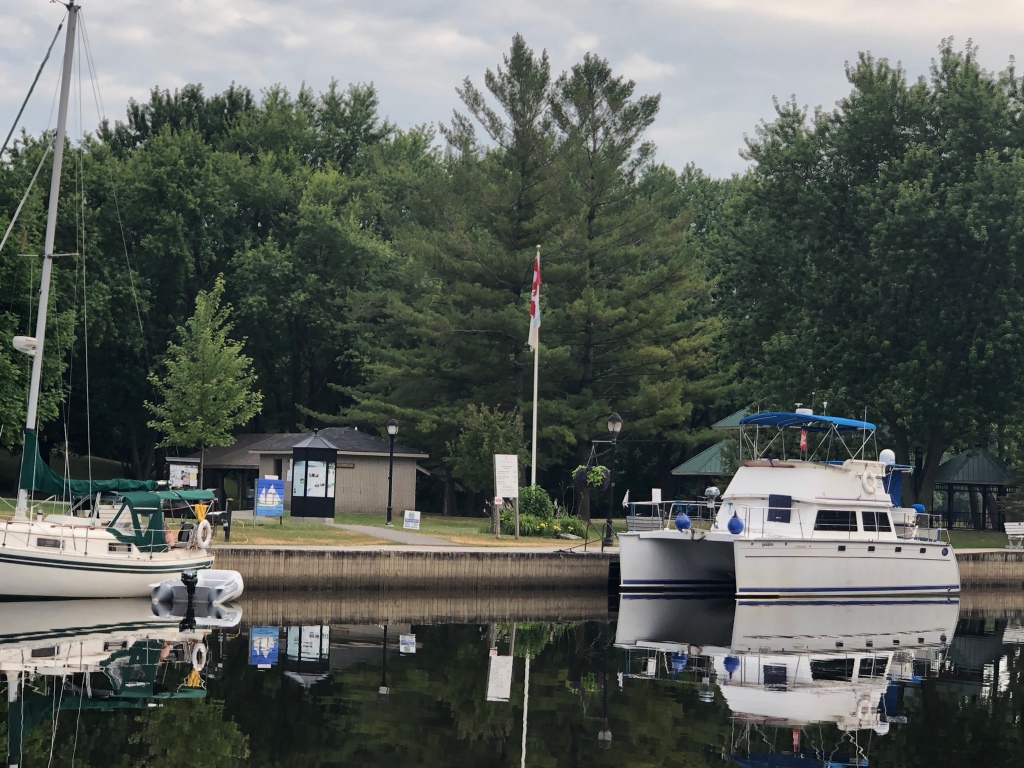 We walked over the bridge to the restaurant for dinner the first night, and almost immediately after ordering, saw Cecil, Martha, their daughter, and their dog being seated! We had another fun visit; tried to convince them to stop in to Brown Island if they ever take a cruise to Alaska (as it seems every Canadian we’ve met wants to do before they die).

We spent the following day not doing much except walking along the riverside,

exploring town, and sitting in our darkened, cool salon, thanking the lord for our air conditioner. I’m sure you all think we are sloths, and you are right, but it is so effing HOT right now, it’s difficult to consider doing anything that takes much effort, especially anytime the sun is out.

We did have one bit of excitement that day. The boat in front of us, the “Sea Turtle” tried to leave the dock, but Captain Ted found his keel had become stuck in the mud. We all worked to push and pull, back up and go forward to get him out. The wife was driving the boat because Ted was on shore using his muscle and various lines to try to get the keel unstuck. Finally, the Turtle’s keel was mostly out because there was some movement forward; unfortunately, as soon as Ted jumped onto the side rail, the extra weight on that side made it settle into the muck again. Finally after getting off, then continuing his efforts to barely free the keel, Ted jumped onto the stern rail, which worked better. However, due to the configuration of the Turtle’s Bimini, he could not climb into the cockpit expeditiously. So there he was, holding onto his Bimini for dear life, teetering precariously on the rail while simultaneously trying to direct his obviously inexperienced wife/driver. His wife was so excited about being free AND having him aboard that she kept going forward at a fair clip–right towards Golden’s stern. Luckily David happened to be on Golden right then; Ted, still barely hanging on, yelled at her to “put it into neutral!”. To her credit, she responded quickly, the Sea Turtle slowed down, and SOMEHOW, David managed to turn the bowsprit aside so it glided harmlessly past our boat, albeit inches away. Whew! I did not have time, nor the forethought, to take pictures. Use your imagination.

We found out later that there is what the local’s call a “tide” in the Napanee river. This is not actually a true tide, but a result of the prevailing winds blowing water towards the north shore of Lake Ontario, causing water levels in the rivers to rise and fall with some regularity. Once we heard that, we looked at our fenders, and noticed they were definitely sitting lower compared to the fixed dock than they had been when we first pulled in—one of the reasons Ted had such a problem leaving when he did was because it happened to be at a “low tide”!

One other cool experience we had–we came back from one of our multiple meals at the restaurant across the river (we were being treated like regulars at the end) to find a book called “Underway” on our deck. The author had inscribed on the fly leaf “Have a Golden Summer! 🙂 Sacha”. We had no idea who’d left it, but later that afternoon, Sacha himself showed up, gliding in behind us on his sailboat. He later explained he’d come by earlier by car (lives very close) and, as a fellow cruiser, left the book for us to enjoy. After 6 months of cruising, we could definitely appreciate the humor in this small volume of boating cartoons. Here’s one:

So now it’s the morning of the 17th, we are traveling down the Napanee, and then will head east to Trenton. My next log entry will hopefully include comments from a 9 year old contributor, grandson Theo. We’re excited to see him and share this experience. Stay tuned!

One thought on “Hanging out on Lake Ontario”