We continued north along the Trent Severn after leaving Burleigh, but only had to travel a couple of hours before we reached the quaint little town of Bobcaygeon. Aren’t you curious about a town so named? So was I, and here’s what I found: Its recorded name bob-ca-je-wan-unk comes either from the Mississauga Ojibway word baabaagwaajiwanaang “at the very shallow currents”, or giishkaabikojiwanaang “at the cliffed cascades” or obaabikojiwanaang “at currented rocky narrows”, or from the French beau bocage “beautiful hedged farmland”. You choose. Here’s a video I took in the channel leading into Bobcaygeon:

Whatever it’s name, Bobcaygeon turned out to be a VERY cute town, and, if you love little shops and boutiques filled with things you don’t need, you’d love Bobcaygeon. We joined the tourists strolling, and of course I found a few things I didn’t really need, then shared an excellent thin crust pizza at Donatello’s, Hunny resting in the shade at our feet. Though we had a perfectly good spot on the lock wall, we decided to continue to another tourist town, Fenelon Falls. I’d heard about this town since starting the loop, mostly because a major sponsor, Pam of the Water Street Clothesline, always encouraged Loopers to stop by, see various sights, and of course visit their shop to say hello (and presumably spend money). Other Loopers raved about their visit to the town and I was curious to see if it matched its hype, so we left Bobcaygeon and headed upstream. I was down below finishing dishes, and David informed me a lock was ahead, so I came up to do my part. After we’d gone through and were a few miles past the lock, I asked David how far to Fenelon Falls, and to my surprise he said, “That was it!”. I wailed that I had really been looking forward to stopping there, and he said that because there was no room at the wall, he assumed we would give up and just keep on going up the waterway. I was not very happy to hear that news, and David was quickly made aware that a major mistake had been made. Since we were now miles past the town, I resigned myself to the fact that I wouldn’t be exploring that town; we went through the next lock (Rosedale) and tied up at the upper (upstream) lock wall. Rosedale turned out to be one of our more pleasant stops. This lock offers free WiFi, clean washrooms open all night long, hot showers for $2, lots of shade, grassy areas, and picnic tables, and easy access to the water for Hunny to take dips. It seems to be a popular spot for families–there were at least 5 kids swimming in the channel for HOURS after the locks were closed for the night—jumping from their boat, floating on styrofoam noodles and in general having a blast. The people here just seem so HAPPY –one woman I spoke to said that she hears that a lot from Americans. Interesting.

Not an hour after we’d docked, I received a text from Susan Merritt, a friend we’d made along the loop last year. She told me she’d just seen photos of Golden going through the Fenelon Falls lock on Pam’s Facebook page, wanted to know if we were going to go to the Water Street Clothesline while there, and to be sure to say hi to Pam for her if we did. We (meaning David–I don’t belong anymore) signed in and looked, and there was Golden: 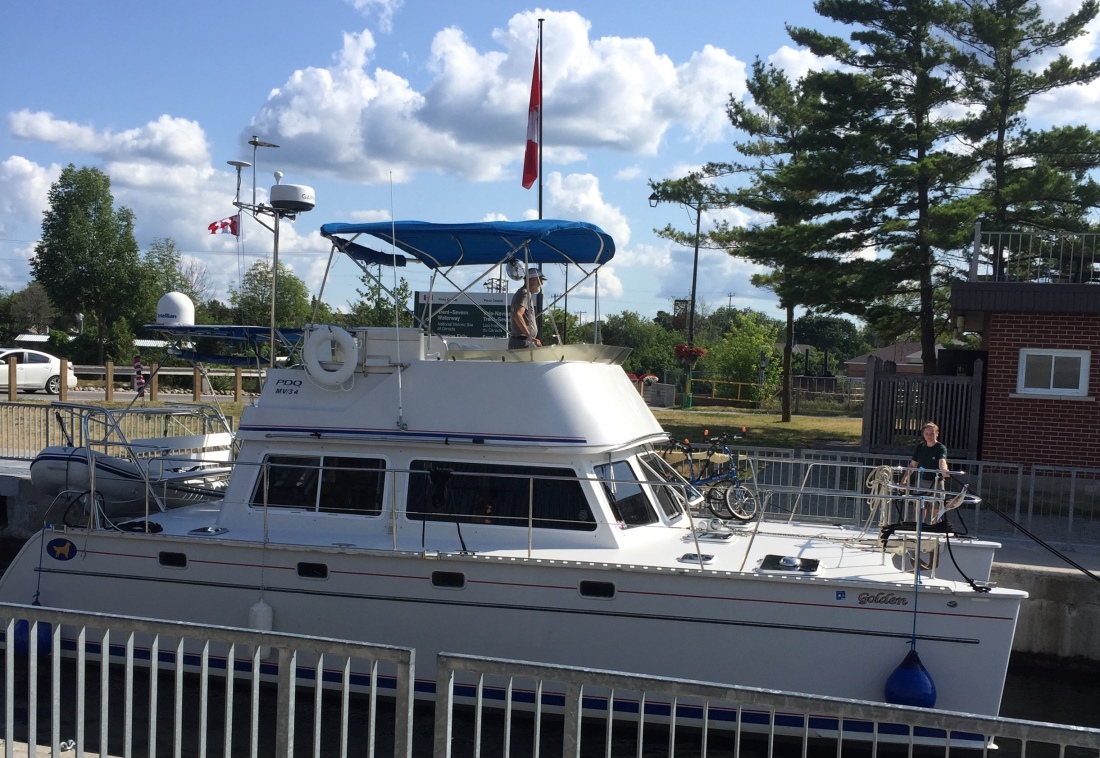 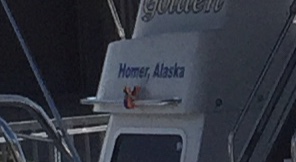 In her posting, Pam noted that we appeared to be from Alaska, and begged us to come back. Talk about twisting the knife!

The next morning, David came up to me and said, “I Googled Fenelon Falls and it’s only 6 miles away or so! A bit of the ride is on a small highway, but the rest are back roads. Let’s go!” So we unloaded the bikes, locked Hunny behind a screen door, made sure the boat would stay cool for awhile by turning on fans, closing curtains, opening windows and doors on the shady side, left plenty of food and water, and hopped on. A quarter mile up the road I noticed my tires were under-inflated, but decided not to go back to the boat, because, heck, it was only a 6 mile bike ride. First David led us along a dirt road that we had to lift our bikes over a gate to enter; after biking for a mile, it dead ended so we returned to our start which meant we’d need to ride further along the highway than he’d thought. After we reached it, we discovered that the “small” highway had zero shoulder, and the speed limit must’ve been at least 90 km/hr. We rode for miles along that highway, passed by semi’s and cars, sometimes within inches of our churning legs. FINALLY we turned off onto what David had assured me was a “back road” which turned out to actually be the main road into Fenelon, was just as fast and busy, and unhappily lacked a shoulder as well. We finally made it into town, surprisingly not flattened onto someone’s windshield, went to Waterstreet Clothesline and bought a t-shirt, had an ice cream cone and a half cup of water (why would we need more water? It’s only 6 miles!), and headed back to the boat. We decided to try a different route that involved biking at least partway on a trail in order to avoid a repeat of our scary ride to get there. The first portion was lovely—a shady, packed dirt trail along the lake, lined by beautiful houses and docks. After a few miles though we had to turn onto a small highway which, although traffic traveled more slowly, still had no shoulder. After about 40 minutes of riding, we finally turned again to ride on a dirt road for another few miles, which led us eventually to guess where? The original 55 mph highway with no shoulder! We’d made a huge circuit and ridden at least 25 miles. We rode and rode and rode along that highway, finally reaching the lock wall and Golden four HOURS after we’d left. It wouldn’t have been so bad except we hadn’t planned for such an extensive ride–my tires were nearly flat, so I was felt like I was riding in sand the entire way, neither of us brought water, and we were constantly worried about Hunny left on the boat alone for so long. It was not our most fun excursion.

Tonight we’re staying again on the same lock wall. One good thing that happened today? Our batteries were fully charged by the sun, despite running fans, lights, propane, chart plotter, and using the inverter to charge electronics for a few hours. Who needs a generator?